WTI crude oil has been trending higher inside a rising channel on its 1-hour time frame and is currently bouncing off the top. A correction is underway and price is testing the 38.2% level at the mid-channel area of interest.

If this is enough to hold as support, price could recover to the swing high at $57.79 per barrel or the channel top at $58 per barrel. The 100 SMA is above the 200 SMA to confirm that the path of least resistance is to the upside or that support is more likely to hold than to break.

However, RSI has some ground to cover before indicating oversold conditions. If the correction keeps going, price could retreat further to the 50% Fib that lines up with the 200 SMA dynamic inflection point or the 61.8% level closer to the channel bottom at $55 per barrel.

Stochastic is also pointing down so price might follow suit, but the oscillator is dipping into the oversold region to signal exhaustion. Turning higher could mean that buyers are returning. 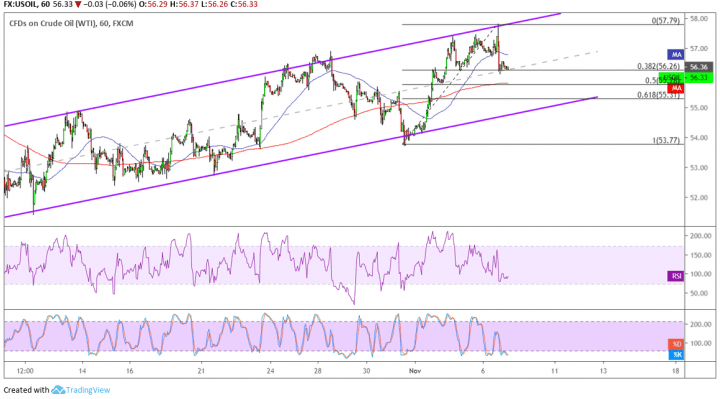 This suggests that demand remains feeble or that oversupply could be an issue. Still, it’s worth noting that the recent reductions in borrowing costs could bring stronger business investment and demand for energy commodities like crude oil.

Besides, the prospect of a trade deal between the US and China being finalized before the end of the month could also be bullish for crude oil. However, there has been some fresh tensions as of late since Beijing has shared a few more demands while negotiations are ongoing.