WTI crude oil continues to hover around the top of its ascending channel on the 4-hour time frame as it bounced off the mid-channel area of interest. Sustained bullish momentum could take it up to the next upside targets marked by the Fibonacci extension tool.

RSI is turning lower to indicate that selling pressure is returning, and the oscillator has yet to cross the center line to reflect a pickup in bearish momentum. Stochastic hasn’t quite reached the overbought region but is crossing lower to signal that bearish momentum is returning. In that case, a move back to the mid-channel area of interest around $57 per barrel or the bottom of the channel closer to $56 per barrel. 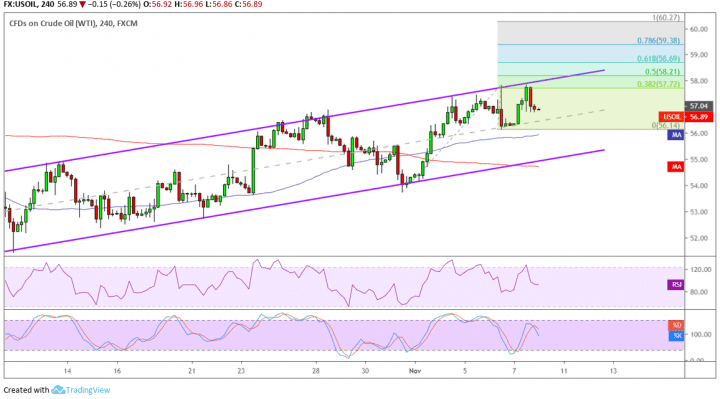 Crude oil is edging lower from resistance once more as traders are starting to doubt that the U.S.-China trade deal will pull through. The Chinese commerce ministry said the two countries have agreed in the past two weeks to cancel trade tariffs in different phases, but a report on Reuters suggested that this idea still faces opposition from U.S. officials.