WTI crude oil failed in its last couple of attempts to break below the $51.50 per barrel mark, then found resistance at the $53.50 per barrel level. This creates a double bottom pattern on its short-term time frames.

Price has yet to test and break past the neckline that’s also in line with the 200 SMA dynamic inflection point. A break above this could set off a rally that’s around the same height as the chart formation, possibly taking crude oil to $55.50 per barrel next.

However, the 100 SMA is below the 200 SMA to indicate that the path of least resistance is to the downside or that resistance is more likely to hold than to break. In that case, price could retreat back to the bottoms if selling pressure persists.

RSI is turning up to indicate that bullish pressure is in play, so a move to the resistance might follow from here. Stochastic is also pulling up without even reaching the oversold region, suggesting that buyers are eager to return. 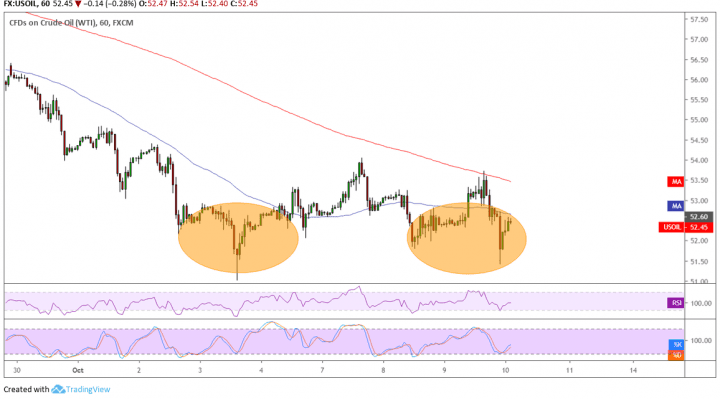 Crude oil continues to trade at the low end of its range as FOMC minutes dampened overall sentiment. There was even some talk of another recession – something that could weigh on business sentiment and hurt demand for commodities.

Also, the EIA reported that crude oil stockpiles rose for the fourth week in a row, keeping oversupply concerns in play amid weaker demand. Note that uncertainty surrounding the US-China trade talks is also keeping a lid on gains as worsening tensions could mean more retaliatory measures on the commodity.

Recall that WTI crude oil is part of the list of items targeted by China in response to increased tariffs by the US on a number of Chinese products. Then again, there has been talk of both nations being open to the idea of a “limited deal” that could prove positive for risk-taking.