WTI crude oil is still trading within its descending triangle on the 4-hour time frame and is currently testing support. A bounce off this level could take price back up to the triangle top around $60 per barrel.

The 100 SMA is below the 200 SMA to indicate that the path of least resistance is to the downside or that support is more likely to break than to hold. This could set off a drop that’s the same height as the triangle, which spans $51 per barrel to $65 per barrel. The 100 SMA seems to be holding as dynamic resistance.

RSI is on the move up but seems to be hesitating around middle ground. Turning lower could indicate that sellers are returning and could push for at least another test of support. Stochastic is also on the move down to indicate that bearish pressure is in play, but the oscillator is nearing the oversold territory to reflect exhaustion. 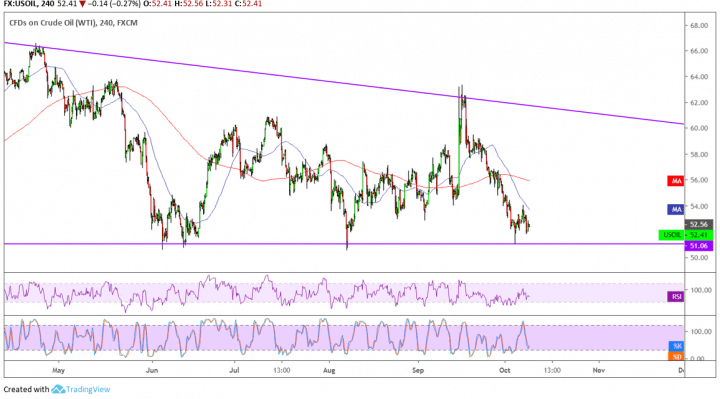 EIA crude oil inventories data is up for release next and it might show a build of 1.8 million barrels, slower than the earlier 3.1 million gain. An even lower read or a draw could be positive for prices as this would ease oversupply concerns.

On the other hand, a larger than expected build could be the catalyst that crude oil needs to break below the triangle bottom and carry on with its decline. To top it off, worsening tensions between the US and China in trade negotiations could also drag the commodity price further south.

Note that crude oil is part of the items targeted by China in its retaliatory measures, so more tariffs could keep hurting demand for the commodity. Conflict in the Middle East could also keep impacting crude oil prices in the days ahead.