WTI crude oil is trending higher on its 1-hour chart as it formed higher lows and higher highs inside an ascending channel. Price is currently pulling back to the mid-channel area of interest that lines up with the 50% Fibonacci retracement level.

The 100 SMA is above the longer-term 200 SMA to indicate that the path of least resistance is to the upside. In other words, the uptrend is more likely to gain traction than to reverse. The 200 SMA also lines up with the mid-channel area of interest to add to its strength as support.

A larger pullback, however, could take WTI crude oil to the 61.8% Fib around $55 per barrel. The channel support is closer to $54.50 per barrel and may be the line in the sand for a correction.

RSI is already indicating oversold conditions and is turning higher to show that buyers are returning. This could take the commodity back up to the swing high at $58.75 per barrel or the channel top closer to $60 per barrel. Stochastic is also in the oversold region to signal exhaustion among sellers and a likely return in bullish pressure. 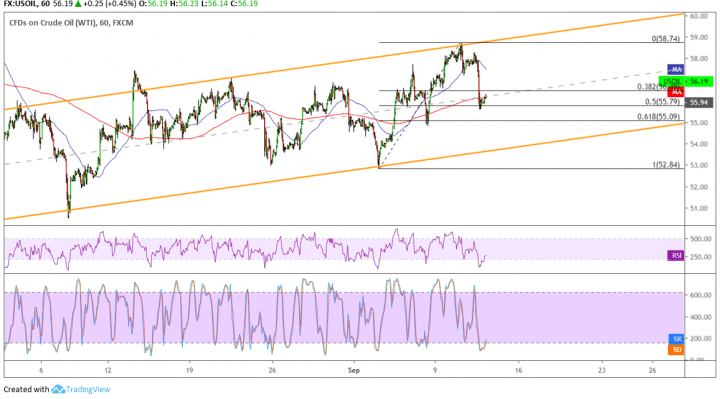 However, the commodity barely had time to sustain a bullish reaction as US President Trump is reportedly considering easing sanctions on Iran. Word is that Trump could join a meeting between Rouhani and French President Emmanuel Macron who might broker a deal. If talks pan out, this could lift restrictions on Iran’s output and flow of oil to the global market, possibly leading to a boost in overall supply and downward pressure on prices.