WTI crude oil is breaking out of its long-term symmetrical triangle consolidation pattern on the daily time frame, indicating that a long-term climb might follow.

The chart pattern spans $40 per barrel to around $75 per barrel, so the resulting uptrend could be of at least the same height. This should be enough to take the commodity to around $90 per barrel or higher.

The moving averages aren’t providing strong directional clues yet, though, as the indicators are oscillating to reflect previous consolidation. Still, price is above these moving averages so they might hold as dynamic support in a pullback.

RSI is still pointing up to signal that there’s bullish momentum left before overbought conditions are seen. However, the oscillator is already approaching the overbought zone to reflect exhaustion, and turning lower could confirm that sellers are back. Stochastic is heading south after recently making it to the overbought region, so price could follow suit. 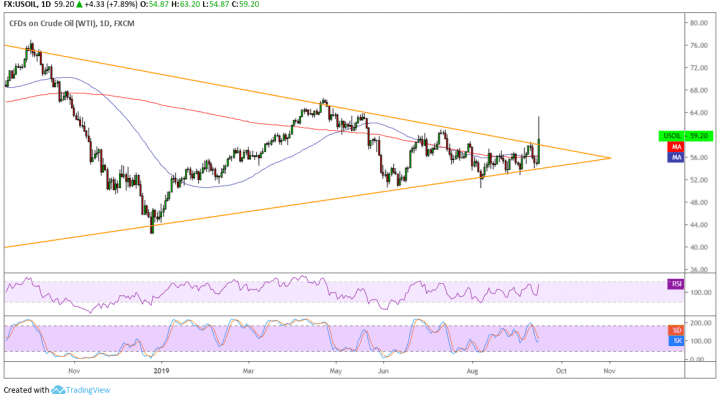 Crude oil popped higher on reports of an attack on Saudi Arabia’s oil facilities. This comes after last week’s confirmation that the kingdom would keep on with its output deal and alliance with Russia. Apart from that, easing trade tensions between the US and China also lifted risk appetite as some predict that tariffs on crude oil might soon be removed.

The drone strikes over the weekend likely crippled around 5% of the world’s global output, keeping oversupply fears in check. According to Saudi Energy Minister Prince Abdulaziz bin Salman, 5.7 million barrels a day of crude oil and gas production have been affected.

At the same time, easing among most major central banks is propping up risk-taking while businesses and investors anticipate stronger lending and spending with lower borrowing costs. The FOMC statement is coming up this week, and another rate cut is eyed.