WTI crude oil is gaining traction on its slide as it slowly closes below the swing low and 38.2% Fibonacci extension. Price could head further south to the next downside targets from here.

The 100 SMA is below the longer-term 200 SMA to indicate that the path of least resistance is to the downside. In other words, the downtrend is more likely to gain traction than to reverse. The gap between the indicators is also widening to show that bearish momentum is picking up.

RSI is already indicating oversold conditions to show that bears are exhausted. Turning back up could show that buyers are returning and might push price back to the nearby resistance levels. The 100 SMA dynamic resistance lines up with the trend line, adding to its strength as a ceiling. Stochastic also reached the oversold region recently and is starting to turn higher to show that buyers might be looking to return. 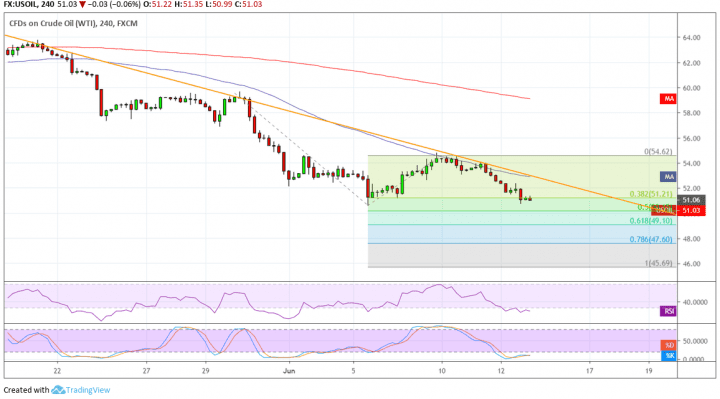 Crude oil suffered another leg lower as the Energy Information Administration reported that crude inventories rose by 2.2 million barrels in the week-ending June 7 versus the expected draw of 500,000 barrels.

This revived oversupply concerns, which don’t bode well for prices given the backdrop of worsening trade tensions. After all, the latter could wind up dampening demand even further as businesses revise their outlook lower to take the latest batch of tariffs into account.

Still, there is some bullish energy coming from speculations that the OPEC would likely extend its output deal in order to keep crude oil prices afloat. Saudi Arabia’s Energy Minister hinted that the kingdom would like to see prices higher than $60 per barrel in order to attract investors and be profitable.