WTI crude oil failed in its last couple of attempts to break below the $51 per barrel mark. Price might be forming a double bottom reversal pattern from here, possibly testing the neckline around the $55 per barrel next.

A break past this resistance could lead to a climb that’s around the same height as the chart formation or around $4. However, the 100 SMA is below the longer-term 200 SMA to indicate that the path of least resistance is to the downside. In other words, the downtrend is more likely to carry on than to reverse.

The 100 SMA is also holding as dynamic resistance at the moment. Also, the gap between the indicators is widening to show that bearish momentum is picking up. A break below the lows could confirm that sellers still have the upper hand.

RSI, however, is pointing up to show that bullish pressure is still in play. This oscillator has just crossed the center line to confirm the presence of an uptrend and possible momentum to spur a break past the neckline resistance. Stochastic is also moving north so price could follow suit while buyers are in control. 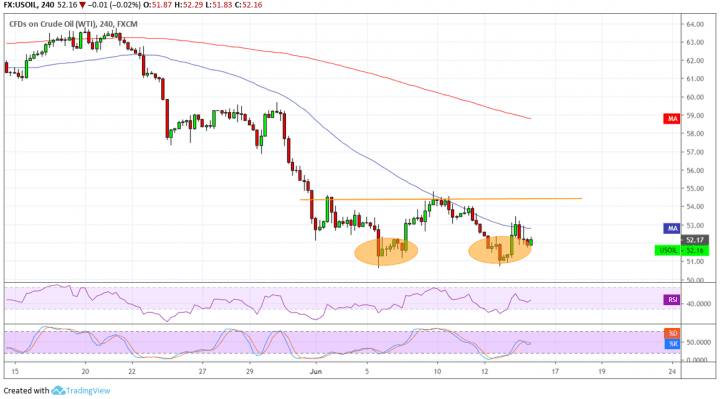 Tensions in the Middle East are keeping prices afloat at the moment, with an attack on two oil tankers near the Strait of Hormuz recently happening. This revived fears of lower production, even against the backdrop of weakening global demand due to resurfacing trade tensions.

Apart from that, last week’s hints that the OPEC might extend its output deal in order to keep prices supported did wind up having a bit of self-fulfilling effect, albeit temporary. As it is, rising stockpiles in the US continue to pose an oversupply concern since is has been going on for a few weeks.