WTI crude oil is moving inside a falling channel on its 1-hour chart but has just bounced off support. Price also broke above a shorter-term falling trend line connecting the highs since mid-April.

This confirms that a correction from the selloff is underway and that a pullback might happen before the downtrend resumes. The 100 SMA is below the longer-term 200 SMA to signal that the path of least resistance is to the downside, but the gap is narrowing to suggest weaker bearish pressure. If an upward crossover materializes, more bulls could join the game and push WTI crude oil past the Fib resistance levels.

At the moment, crude oil is stalling at the 38.2% Fibonacci retracement level and 200 SMA dynamic resistance. If this holds as a ceiling, crude oil could head back to the swing low around $44 per barrel or create new lows. On the other hand, a climb could still encounter roadblocks at the 50% Fib near $49 or the 61.8% Fib at the $50 psychological level. 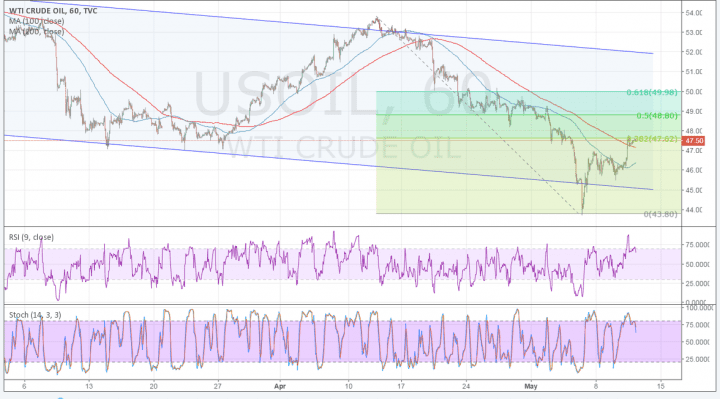 RSI is indicating overbought conditions and turning lower to show that sellers are regaining the upper hand. Similarly, stochastic is pointing down and ready to head south so WTI crude oil might follow suit.

Larger than expected reductions in stockpiles for the reports released by the American Petroleum Institute and the Energy Information Administration are keeping prices supported for the time being as oversupply concerns remain subdued. In addition, there are strong expectations for the OPEC to announce an extension of its output deal by another 6-9 months during their upcoming meeting on May 25.

Non-OPEC member Russia, which is also a large oil producer, expressed its willingness to participate in a deal extension if this pushes through. This could put further downside pressure on output and allow price to stay afloat. Still, it’s worth noting that demand is expected to slow as China reported a weaker pace of expansion in both its manufacturing and non-manufacturing sectors.

To add to that, renewed expectations of Fed tightening could keep a lid on consumer spending and business activity, also weighing on demand for oil and other energy resources. Expectations of higher production in Libya, which is exempted from the OPEC deal, could also keep supply pressures in place.