WTI crude oil is back to the top of its range after a sharp bounce off support. Technical indicators appear to be suggesting that this range resistance might hold again.

The 100 SMA is below the longer-term 200 SMA to indicate that the path of least resistance is to the downside and that the ceiling is more likely to hold than to break. Price is trading above both moving averages, though, so there is bullish pressure in play.

RSI has been hovering around the overbought region for quite some time to reflect exhaustion among buyers. Turning lower could confirm that sellers are ready to return and push for a move back to the bottom of the range at $60.75 per barrel. Stochastic is also in the overbought region to show that buyers could use a break and let sellers take over. 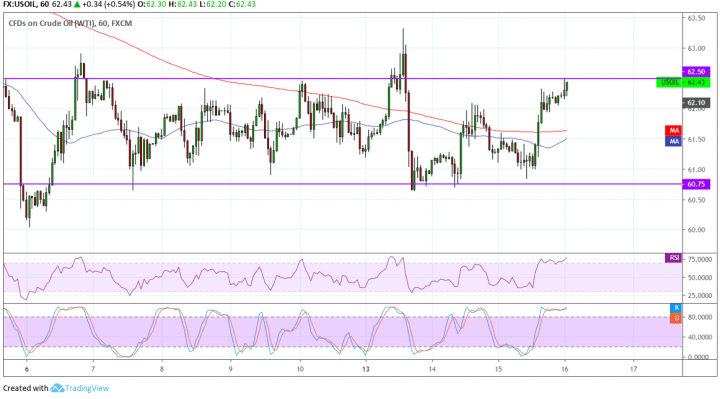 The Energy Information Administration reported a build of 5.4 million barrels for the week to May 10 versus the expected increase of 3 million barrels. This contrasts to the draw of 4 million barrels reported in the previous week, suggesting that oversupply concerns may be back in play.

However, crude oil was able to benefit from rising tensions in the Middle East that could wind up dampening global supply. Keep in mind that the OPEC still has its production agreement in force that limits output among member nations, so the conflict could further dampen supplies.

Saudi Arabia said on Tuesday that armed drones struck two oil pumping stations, a couple of days after the sabotage of oil tankers near the UAE. Analysts pointed out that this may be related to US-Iran tensions after the former removed waivers on sanctions against the latter’s oil exports.

Meanwhile, one factor that could keep a lid on rallies is the rise in trade war concerns as the US and China might be poised to announce another round of retaliatory tariffs.