The price of WTI Crude Oil pulled back on Wednesday to trade at around $55.10 after topping $57.50 on Tuesday during a week of gains. The Light Crude Oil continues to trade in an upward trending wedge that is widening with proceedings, which indicates a significant rise in volatility.

After bottoming at $54.53 on Wednesday morning, the WTI Crude Oil made a short rebound to trade above $55 in the late afternoon session. This creates some compelling opportunities for both the bulls and the bears heading into the tail end of the week.

The price of WTI Crude Oil is trading at the back of a tepid week after last week’s Fed rate cut and President Trump’s announcement about imposing trade tariffs on China. This is reflected by the nature of the decline in oil prices between July 30 and August 8.

However, things have been more promising this week. On Tuesday, the API Weekly Crude Oil Stock as of August 9 was -2.19M barrels compared to the previous period figure of -3.40M. However, on Wednesday, the EIA report showed that crude oil stocks increased by 1.580M barrels as compared to an expected decrease of 2.761M barrels.

The Export and Import Indexes came out better than expected on Wednesday while the Consumer Price Index also beat expectations on the previous day. Looking forward, traders will be watching the outcome of the Initial Jobless Claims in the US tomorrow as well as Retail sales numbers ex-autos. 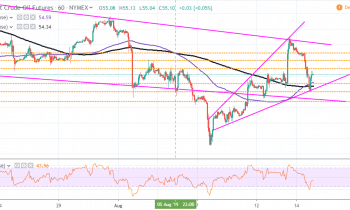 From a technical perspective, the price of WTI Crude Oil appears to have recently hit oversold levels. It is now on the way up after entering the normal trading zone in the Relative Strength Index Indicator. 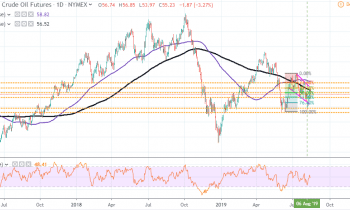 In the daily chart, the price of Light Crude Oil appears to be on a pullback after making significant gains between June and July. And as illustrated using the Fibonacci Retracements, the price of oil is now pegged between the 50% and 61.80 Fib levels. This creates multiple opportunities for both the bulls and the bears.

In summary, the price of WTI Crude Oil appears to be experiencing short-term bullish pressure while in the long-term the bears appear to be in control following the latest pullback.