The price of WTI Crude Oil surged on Thursday afternoon to trade at about $53.90 after bottoming at around $51.38 on Wednesday. Light Crude Oil plunged in the last week of September to bottom just under the $51.00 level on October 3 but now appears to have found strong support just above the key level.

The price of oil has traded in a consolidative sideways movement since last week but today appears to have broken outside that channel after surging above $53.80 only for the second time this week.

From a fundamental perspective, the price fo oil is trading at the back of another mixed week in terms of economic adat while reports from some fo the major governing bodies do not point towards a positive future in the near term.

One of the main stakeholders of the oil production and supply market OPEC cut its estimates for demand growth in 2019 to 0.98 million barrels per day, which compared to the latest weekly EIA report does not auger well for oil prices.

However, the price of WTI Crude Oil has rallied irrespective of this fact with the bulls looking more towards the technicals rather than the fundamentals. US economic data this week has left a lot to be desired while globally, the markets sent mixed signals.

The Brexit uncertainty is still unresolved despite positive developments in recent weeks after Northern Ireland’s Democratic Unionist Party rejected the EU’s offer on concession talks. The US-China trade wars have recently cooled off but the future is still blurry, which again puts pressure on global economies thereby affecting the potential demand for oil. 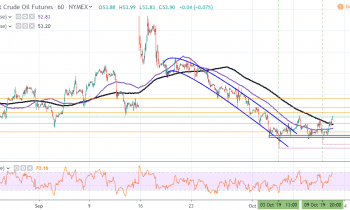 Technically, the price of WTI Crude Oil appears to have recently hit the edge of the overbought levels and this could trigger the next pullback. The light Crude Oil continues to trade in a sideways channel, which supports swing trading strategies.

Therefore, the bulls will be targeting profits at around $54.31 or higher at $54.85 in the hope that the price breached the current resistance. On the other hand, the bears will target the next pullback at around $53.29 or lower at $52.50. 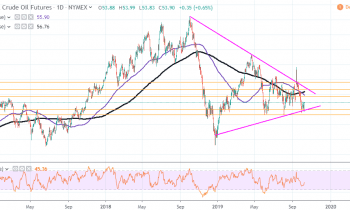 In the daily chart, the price of oil appears to be trading within a consolidative triangle formation, which could lead to a major breakout. The bearish pressure appears to be more intense compared to the bullish sentiment but after rebounding off the current trendline support, the bulls will be optimistic going into Friday.

In summary, the price of WTI CRude oil appears trading in a consolidative triangle formation in the long-term, but in the short-term, it is more of a sideways movement.