AAR Corp. (NYSE:AIR), leading provider of aviation services to commercial and government operators, MROs, and OEMs, stock fell 8.23% (As on September 23, 11:38:15 AM UTC-4, Source: Google Finance) after the company posted lower than expected results for the first quarter of FY 23. The consolidated sales to commercial customers increased 10% over the prior year quarter, primarily due to further recovery in the commercial market. The consolidated sales to government customers decreased 19% due to the natural completion of certain government programs, such as the Afghanistan contracts. Sales to commercial customers were 66% of consolidated sales, compared to 59% in the prior year’s quarter, primarily reflecting the natural completion of certain government programs as well as the continued recovery in the commercial market. Adjusted gross profit margin increased from 16.1% to 18.1%, primarily due to the favorable impact from our actions to reduce costs and improve the operating efficiency. Adjusted operating margin increased from 5.5% to 6.9% as a result of the actions the company took to improve the operating efficiency as well as the recovery in commercial sales. 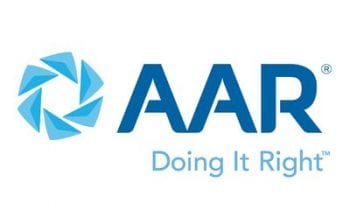 Additionally, the company had repurchased 0.5 million shares for $21.9 million in conjunction with the $150 million share repurchase program the company announced last year. Cash flow provided by operating activities from continuing operations was $7.0 million during the current quarter. As of August 31, 2022, the net debt was $70.7 million and the net leverage was 0.44x.

On the other hand, during the quarter, the company had announced several new contract awards, including firm-fixed price contract from the U.S. Air Force to produce Next Generation All Aluminum Cargo Pallets with a total contract value, including option periods, of $173.5 million. The contract from the Norwegian Defence Logistics Organisation to provide commercial common parts for the Royal Norwegian Air Force P-8A fleet and the product launch with Textron Aviation Defense of Airvolution, AAR’s customizable, cloud-based, end-to-end repair cycle management tool. The company expects growth to return in the government business.