Powell took the podium at a central bankers meeting held in Wyoming on Friday as he called the escalating trade war between the US and China “a new challenge” for policymakers. He did not give any indication of cutting interest rates, a sign of monetary easing to put the US economy on a ventilator.

Just ahead of Powell’s speech, China announced that it is going to increase tariffs on $75 billion of US imports effectively from September. Beijing’s approach ignited Trump to issues a series of tweets, one of which saw him saying: “We don’t need China and, frankly, would be far better off without them.” In another statement, Trump criticized Powell’s decision to hold the rate cut and labeled him an “enemy.”

“As usual, the Fed did nothing!” the president tweeted.

….My only question is, who is our bigger enemy, Jay Powell or Chairman Xi? 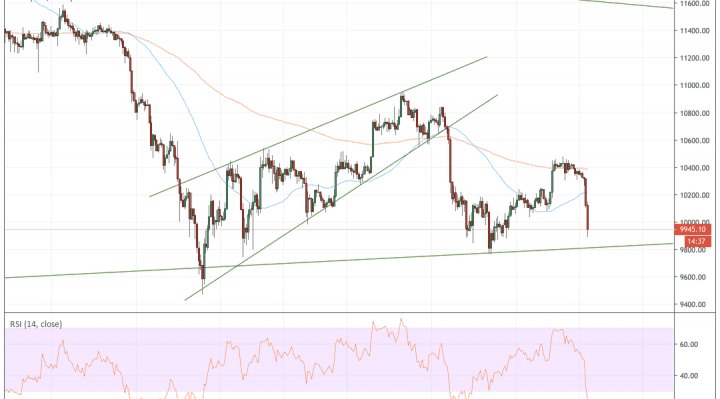 The benchmark cryptocurrency underperformed despite the speculations of many about its safe-haven status. This year saw bitcoin outperforming every other haven asset, including Gold, Japanese Yen, and US Treasuries, in the face of dwindling investors sentiment in the mainstream markets.

The US-China trade war, a weakening yuan, and underwhelming economic data from manufacturing-rich countries like China and Germany, evidently pushed the bitcoin price higher during the second quarter, bringing its yearly gains well above 160 percent – more or less.

Nevertheless, the sentiment is appearing to be wearing off as of late. Bitcoin has stopped reacting to the slowing economic growth around the globe, and its market bias is visibly getting driven by intraday speculation.

“I’ve had a big laugh with the China safe haven bitcoin outflows narrative earlier on,” said market analysts Alex Krüger. “There are no safe-haven outflows, no hedging. There is though speculation from macro traders. Speculation on hedging, rather than hedging. Speculation, if large enough, does move markets.”