Bitcoin seems to be losing bullish momentum recently as price formed lower highs since May 11. Price is consolidating inside a symmetrical triangle pattern on its 1-hour time frame, but this can also be seen as a bullish flag on longer-term charts.

The 100 SMA is above the 200 SMA for now so the path of least resistance is still to the upside. This means that a continuation of the climb is more likely to happen than a reversal. However, the gap between the moving averages is also narrowing to signal weakening buying pressure and a potential downward crossover that would draw sellers in.

RSI is heading down so bitcoin price could follow from here. Stochastic just recently pulled up from the oversold region to show a return in buying momentum but is turning back down again. In any case, the 200 SMA lines up with the triangle support, adding to its strength as a floor, but a break lower could confirm that bears are gaining more energy. 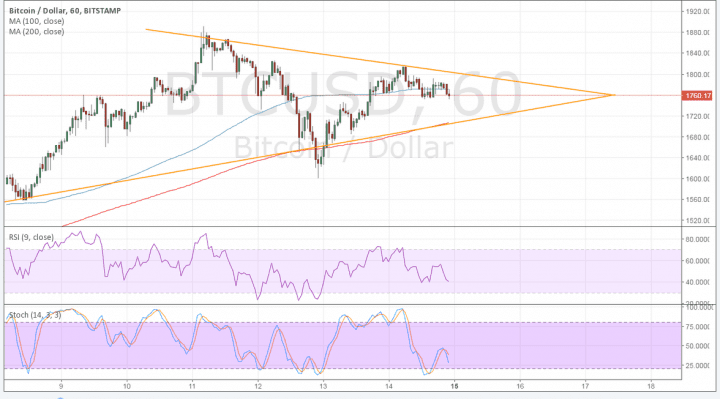 Bitcoin is pausing from its strong climb in the past weeks as traders are waiting to hear the SEC decision on the COIN bitcoin ETF. The regulator previously denied the application but opened it up for review and additional comments until today, likely due to the Japanese government’s recent decision to recognize bitcoin as a legal form of payment.

Approval of the bitcoin ETF could mean greater market access and liquidity, which might also lead to a surge in volumes similar to what was seen in Japan for the past couple of weeks. In addition, SEC regulation could also encourage other nations to be more open to bitcoin and support its legitimacy as well.

Apart from that, the presence of risk aversion in the markets owing to geopolitical risks from North Korea and Brexit-related uncertainties in Europe could keep investors bullish on bitcoin. More signs of a slowdown in China could also keep the cryptocurrency supported.