Bitcoin had a sharp selloff recently but the losses halted upon reaching the support of the ascending channel that’s just forming on the 4-hour time frame. This lines up with the 100 SMA dynamic support around the $2500 levels.

Speaking of moving averages, the 100 SMA is above the longer-term 200 SMA so the path of least resistance is to the upside. In addition, the moving averages have maintained their gap so there seems to be no immediate chance of a downward crossover just yet. Still, a break below the 100 SMA and channel support might test the 200 SMA dynamic inflection point at $2300.

Stochastic is already pulling up from the oversold area to reflect a return in buying pressure. The oscillator has some room to head further north before indicating overbought conditions so more gains could be in the cards. RSI is also turning up so bitcoin might follow suit. 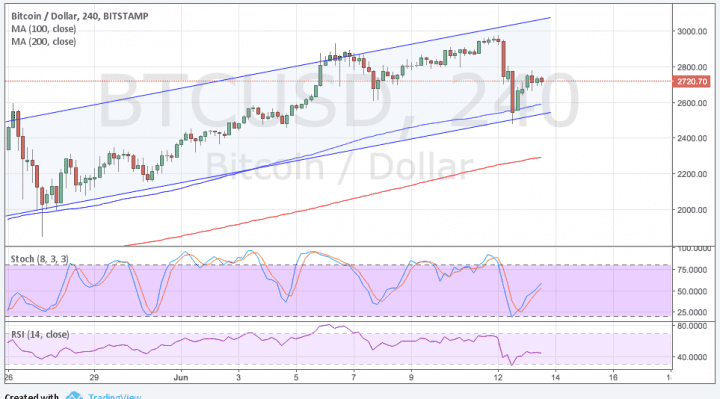 Dollar demand could dictate BTCUSD price action in the next few trading sessions as the FOMC decision is coming up and a 0.25% rate hike is being priced in. Traders are more curious to find out if the Fed would be able to maintain its pace of tightening, given the slowdown in the first part of the year and their plans to readjust their balance sheet.

Meanwhile, bitcoin is starting to regain ground after a couple of headwinds earlier on. For one, there was that tweet by Mark Cuban that questioned the valuation of bitcoin and warned that it could be in a bubble. Another setback was the downtime in Coinbase and BTC-E brought forth by an unprecedented level of traffic and trading activity, leading some to speculate that the network could no longer handle more transactions.

Risk sentiment could also have a huge influence on bitcoin price moving forward, especially since a number of other central banks are scheduled to make policy decisions. Of particular interest is the BOE announcement now that the UK government is striking a coalition ahead of Brexit talks and the UK CPI beat expectations.