The benchmark cryptoasset surged by up to $400, or 4.18 percent, to establish an intraday high of $10,460 early Hong Kong morning. While a correction ensued following the Asian market open, the downside maintained the 24-hour positive bias. As of this time of writing, at 0642 UTC, bitcoin was trading at $10,322.13 on US-based Coinbase exchange. 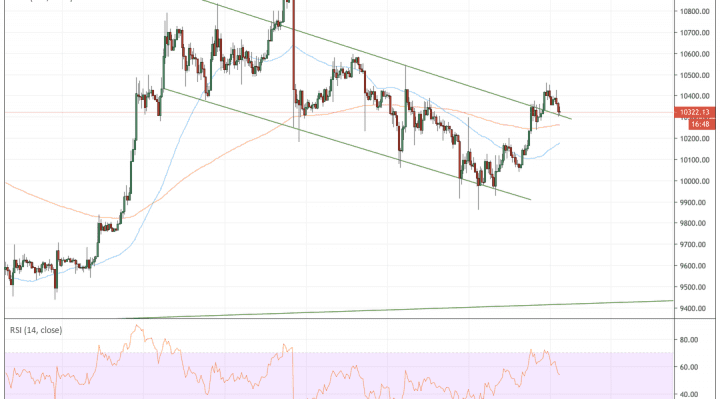 The move uphill closely followed the ECB President Mario Draghi’s decision to push European’s market benchmark rate further into negative territory – from -0.4 percent to -0.5 percent. He also said that ECB would resume quantitative easing program, and buy €20 billion of bonds every month from November until inflation comes “sufficiently close to, but below 2 percent.”

Investors with stakes in the cryptocurrency industry said ECB’s decision is bullish for bitcoin. Thomas Lee, the co-founder of New York-based Fundstrat Global Advisors, said in an interview with CNBC’s Fast Money that the cryptocurrency would go high if equity markets do the same. He presented a pattern that showed bitcoin tailing the gains of US equity benchmark, the S&P 500 index.

“Bitcoin is stalled because the macro outlook is stalled,” added Lee. “I think in a world without trend, bitcoin won’t go up.”

The S&P 500 index yesterday inched towards hitting an all-time high on ECB stimulus news and renewed hopes for a trade resolve. Lee suggested that S&P’s rise, alongside easing programs would have an indirect but positive impact on bitcoin, something that could push its value beyond its historic high of $20,000.

Bitcoin has fallen 12% from its June peak, and @Fundstrat‘s Tom Lee says one unexpected thing could propel its next move higher. pic.twitter.com/tny5hDm6lw