Bitcoin has gained yet another anti-fan. But this time, it is the world’s most powerful and influential person that is hating it.

US President Donald Trump on Thursday dropped a tweet bomb on the world’s leading decentralized digital asset. The White House chair said he is “not a fan of bitcoin and other cryptocurrencies,” explaining that the asset lacked real value and facilitated online crimes, including drug trades.

I am not a fan of Bitcoin and other Cryptocurrencies, which are not money, and whose value is highly volatile and based on thin air. Unregulated Crypto Assets can facilitate unlawful behavior, including drug trade and other illegal activity….

Trump stretched its criticism to Libra, a bitcoin-like cross border remittance project launched by Facebook, the world’s leading social media company. The president said the Mark Zuckerburg’s latest foray into the financial sector would be subjected to all the prevalent banking guidelines and regulations.

“Facebook Libra’s “virtual currency” will have little standing or dependability. If Facebook and other companies want to become a bank, they must seek a new Banking Charter and become subject to all Banking Regulations, just like other banks,” tweeted Trump. 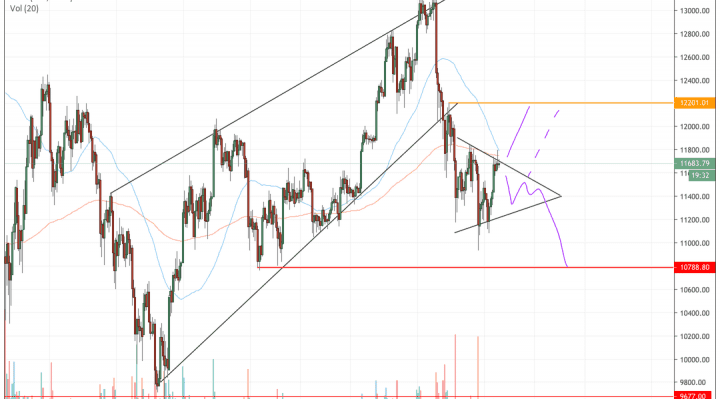 Tweets that send the US stocks down could not incite a similar sentiment in the bitcoin market. The BTC/USD exchange rate suffered a minor drop  following Trump’s tweet – partially because it was already correction downwards – but recovered its intraday losses almost too quickly

The pair established an intraday low of $10,933 this London morning, which soon followed a brief bounce back. The move upside took the bitcoin rate up to 6.66 percent higher – to $11,799, indicating that traders didn’t weigh in Trump’s tweets.

On the contrary, the market continued to respond to its prevalent technical parameters, as shown in the chart above. The BTC/USD instrument so far is trending inside a bearish pennant on the hourly charts, which could mean a continuation of the downside correction. A break below the pennant support could have traders put a Short target towards the $10,788.80 level. And if the previous wedge pattern holds, the price might fall to as low as $9,711.

But that does not mean its Trump, who is shaking investors’ confidence. Bitcoin is already more than 200 percent up in 2019, and a mere bearish correction appears natural. As far as the US monetary policies are concerned, the cryptocurrency industry remains unfazed by the tweets of politicians because it is up for the big game.