Bitcoin looked ready to pursue a big decline this Wednesday but its downside momentum hit a wall.

The top cryptocurrency formed a deep wick downwards to establish an intraday low of $7,593. It recovered following the New York morning bell by circa $300, suggesting higher demand near the $7,500-$7,600 area. Interestingly, the same range (as shown via red bar) capped the price from pursuing extended downtrends in multiple instances. 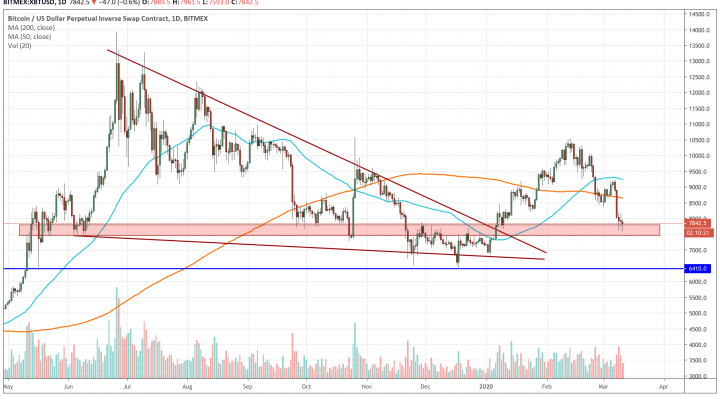 But bitcoin’s likelihood of holding the redded support weakened as the Dow Jones Industrial Average slipped into its bearish territory for the first time since the 2008 financial crisis. The blue-chip stock index plunged 1,465 points, or 5.9 percent, bringing its total decline from local high to about 20 percent.

The declines gained momentum mid-day after the World Health Organization (WHO) announced the novel Coronavirus COVID-19 a “global pandemic.” The public health organization said it was concerned with the virus’s fast-spreading across the globe and alarming level of inaction against its expansion.

Bitcoin lately ditched its safe-haven tag to tail the stock market crash. The cryptocurrency declined by almost 28 percent as investors arguably dumped it for short-term gains – and to cover their margin positions in other markets. But despite the plunge, it was trading about 8 percent higher on a year-to-date timeframe.

At the end of the day, bitcoin is a commodity that cannot function as a store-of-value against a crisis as unique as Coronavirus. It has already performed better than other assets, including Gold, for the last eleven years – and the recent drag on its prices reflect investors’ inclination to raise cash.

And to some analysts, the drag may continue further. Peter Schiff, CEO of Euro Pacific Capital, said institutional investors would unplug bitcoin from their portfolios, adding:

“Bitcoin has finally proven conclusively that it’s neither a store of value, a safe haven, nor a non-correlated asset. The Bitcoin chain letter has finally run out of links.”

If any institutional money ever actually went into #Bitcoin it's about to come out, never to return. Bitcoin has finally proven conclusively that it's neither a store of value, a safe haven, nor a non-correlated asset. The Bitcoin chain letter has finally run out of links!

Opinions differ elsewhere. James Viggiano, the founder of New Zealand-based Cryptosaver, said in a long thread published Wednesday that bitcoin remains a safe-haven even against the booming Coronavirus pandemic.

“It will be obvious in hindsight and it could cause a black swan event when the market realizes this,” he stated. “The upcoming halving could be the catalyst.”

Elixium, a prominent crypto market analyst, posted an image that showed bitcoin expecting a strong bounce from the area surrounding the $7,900 level. The narrative came in the wake of the cryptocurrency’s historical rebounds from the parabolic floor shown in the chart below. 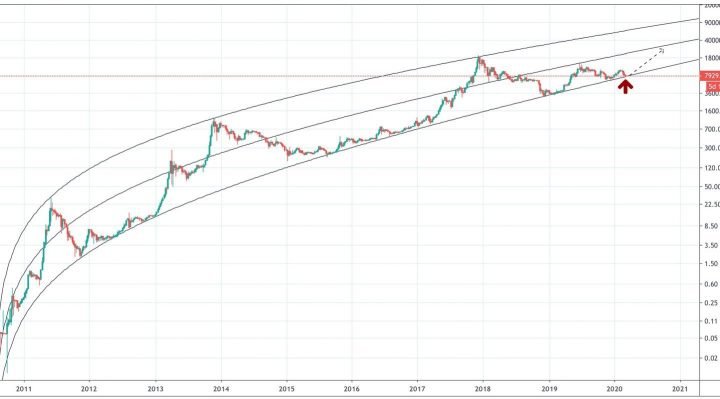 “Bitcoin is [either ]going to crash to $100 or pump to $30,000+ by the end of this year, due to the end or continuation of the long term macro trend,” Elixium said. “Interesting times.”