Bitcoin Price Pulls Back Off Session Highs After Falling Below $8,500

The bitcoin price pulled back off session highs of about $8,777 to bottom just below the $8,500 level before recouping some losses late on. Bitcoin has been trading in a consolidative sideways channel since dipping at the start of the week.

The price of the pioneer cryptocurrency is now pegged centrally on the RSI indicator of the 60-min chart following Friday’s attempted rebound. The 100-hour and the 200-hour SMA lines are above the current level of the bitcoin price and this indicates a slight bearish bias in the market sentiment.

From a fundamental perspective, bitcoin just can’t seem to shake off the stigma attached to cryptocurrencies. The latest news coming out of Mexico regarding the grounding of a state-owned petroleum firm for ransomware as attackers demand $5 million in bitcoin paints a negative image to the cryptocurrency industry.

The pseudonymity of bitcoin is seen as the perfect opportunity by ransomware attackers who continue to harass multi-million dollar corporations and individuals alike. This comes at a time when previously strict governments are beginning to soften their stance towards cryptocurrencies.

For instance, the Canadian giant baning institution, the Royal Bank of Canada is reportedly planning to launch a bitcoin back account and a cryptocurrency exchange.

The latest rounds of economic data came out mixed in the US while in the UK, the PPIs, the CPIs, and the GDP all missed expectations. The EU’s CPIs were mixed as well, which again leaves bitcoin struggling for direction going into next week. 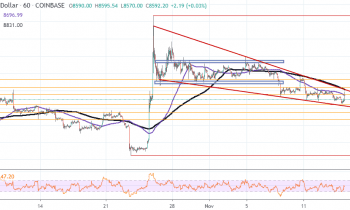 Technically, the price of bitcoin has been trading within a descending wedge since the late last month and this indicates a bearish bias in the market sentiment. Bitcoin recently bounced off the boundary of the normal trading zone and the oversold levels and now is perched centrally in the 60-min RSI indicator. 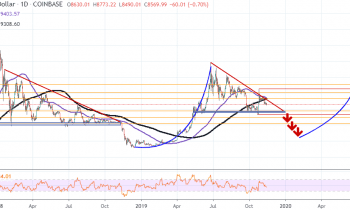 Things look more interesting in the daily chart. Bitcoin price appears to be about to complete a mirror pattern to the 2018 movement. The price of the bitcoin is on the verge of completing the formation of a consolidative triangle, which could be followed shortly by a bearish breakout before we begin to realize another resurgence.