Bitcoin Pulls Back Towards $8,300 After Setting a New 2-Week High

The price of bitcoin (BTC/USD) pulled back on Friday to trade at around $8,366 after rallying to set a new 2-week high of $8,827 earlier. Bitcoin price has been trading within a relatively choppy sideways channel over the last two weeks amid a lack of direction in a muted market.

The price of the pioneer cryptocurrency appears to be trading closer to the oversold zone of the RSI indicator but there is still some room left to run before it crosses the boundary.

From a fundamental perspective, the bitcoin price is trading at the back of another low-key week in terms of cryptocurrency-related market-moving news. The only bit of news coming in this week carries on from last week after MasterCard joined PayPal and three other financial services companies in withdrawing their support for Facebook’s Libra.

This has a slight negative impact on the price of bitcoin and other cryptocurrencies, which is why the BTC/USD has maintained a sideways movement this week.

From an economic standpoint, the week has been mixed with a few positive developments regarding the US-China trade talks and Brexit helping to bring back some positivity in the market. However, with several US economic parameters missing targets during the week led by the Producer Price Index and the Consumer Price Index, the general outlook remains tepid, which is not good enough to drive cryptocurrency prices higher. 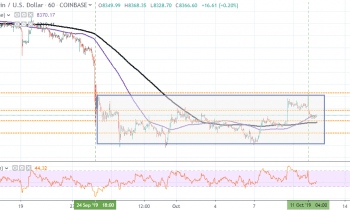 Technically, the price of bitcoin appears to be trading just below the 100-hour SMA line and a few pips above the 20-hour SMA. This limits its current movement, which again is demonstrated by the consolidative pattern formation that followed today’s pullback. 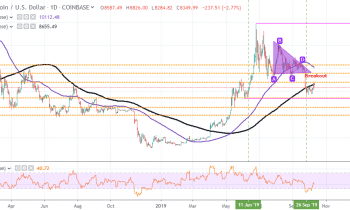 In the daily chart, the price of bitcoin (BTC/USD) appears to have dropped out of a consolidative triangle formation. Since that bearish move, it has tried to recover but the pattern appears more consolidative, which means it won’t be a quick return to the top.

In summary, the price fo bitcoin appears to be trading in a consolidative pattern formation following the recent plunge. This could set things in motion for the next rally.