Bitcoin Rally but Risks Falling to $3,570 to Fill Futures Gap

Bitcoin prices rose on Tuesday even though it remained under the pressure of facing another wave of selling.

The benchmark cryptocurrency traded as high as $5,466.75 on US-based Coinbase exchange, showing signs of growth following the European market open. The bounce came in contrast with an erratic sell-off Monday that saw bitcoin trading as low as $4,432.30, leaving some traders to hope for a further price recovery.

George, a full-time crypto trader, noted that bitcoin’s latest rebound had it break above a “weekly open” resistance area. The Twitterati highlighted that the cryptocurrency could extend its upside momentum above the area to as far as $6,500 before it plunges again, as shown in the chart below. 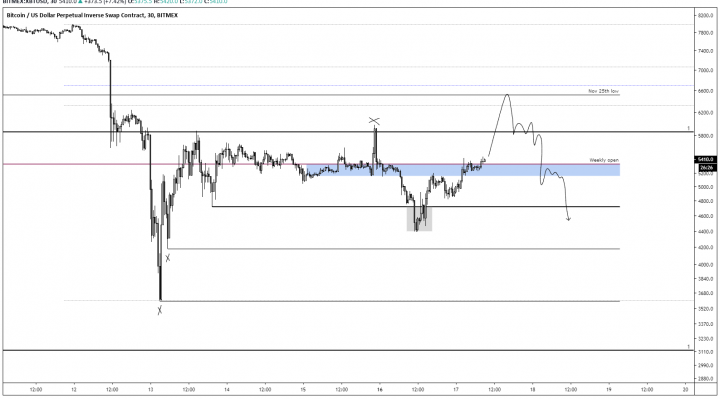 “Broke above the weekly open,” said George. “I’m out of my short hedge. Seems like we’ll see some upside. Not going to long this. Not my setup. Watching the highs for a potential short play.”

Bitcoin’s bullish targets met an equally convincing downside risk scenarios. Crypto trader Carl, who hosts a popular bitcoin channel on Youtube dubbed as ‘the Moon,’ reminded the community about the presence of a gap at $3,570 on CME Bitcoin Futures 4H chart.

In more than 90 percent of the cases, bitcoin’s spot price follows the missing candles on the futures graphs to fill them. Carl feared that bitcoin could continue falling into the negative zone to hit $3,570, adding that there is still no such gap on the cryptocurrency’s daily charts.

On the 4-hour timeframe this is actually an unfilled gap in the $BTC CME chart. There is NO gap on the daily timeframe though!

Carl’s statements also came at the time when bitcoin faced downside risks from the emerging Coronavirus pandemic. It lately fell victim to the liquidation of risk-averse funds that are made to cover investors’ losses in stocks by selling profitable safe-havens. Investors dumped bitcoin, which as sitting atop 40 percent gains in 2020, to pay for margin requirements.

The stock markets are falling even now as major cities in the US and Europe heads towards lockdown to limit the virus. Less corporate earnings, followed by fears of a global recession, are making people hoard cash more than any other asset, even bitcoin.

With that said, the likelihood of bitcoin filling the futures gap at $3,570 is higher per the current situation.

Even as the bitcoin prices threaten to fall further, traders are calling it a once-in-a-lifetime opportunity to purchase the cryptocurrency at cheaper rates. Some are even reminding the community of gold and how it behaved the same as bitcoin in the 2008 financial crisis, only to rise later by about 170 percent.

The prospect of #bitcoin as gold 2.0 has not changed. In an economic shock people will take flight to cash.

In 2008 gold took a hit and eventually recovered faster than the S&P 500. Bitcoin will do the same.

So far, there is no certain metric that proves bitcoin is a go-to safe-haven in times of an economic crisis. Coupled with the pandemic features, the cryptocurrency is less likely to comfort investors that would rather opt for healthcare and food stocks. Whether or not bitcoin could rebound out this mess remains a question best left to the future.