Almost a year ago, the Australian former polymath made a bold prediction about his rebellious blockchain platform Bitcoin SV. He forecasted that the project’s native token BSV would surge over $1,200. Looking at the present, the prediction looks like a cruel prank played upon amateur investors. 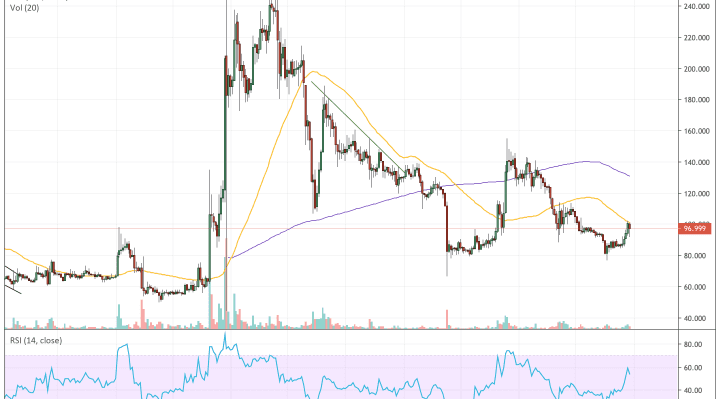 The BSV-to-dollar exchange rate today established an intraday low of $91.93, down circa 92 percent from the level proposed by Mr. Wright. The pair’s move downhill brought its year-to-date (YTD) gains close to 10 percent. At its highest, it was trading at $255.

Idiosyncratically amazing, the profits still appeared dwarfed before cryptocurrencies that Mr. Wright openly despises. That includes the benchmark asset Bitcoin that is now looking to close 2019 with more than 100 percent in gains.

CSW made a price prediction for BSV over $1k by the end of the year with 97.8% probability.

This prediction turned out to be spectacularly wrong.

Does this mean anything? Does it reduce your respect/trust in Craig at all?

BSV investors have many villains to blame for the coin’s underperformance. But the root of all causes for its plunge is Mr. Wright himself.

The year saw the founder in news for all the wrong reasons: He sued the people who accused him of not being Satoshi Nakamoto, the pseudonymous creator of Bitcoin; he himself got prosecuted for allegedly stealing about $11 billion worth of bitcoin from his deceased partner Dave Kleiman; and most importantly, the Florida court that heard the matter ruled him out as “a liar” and fraud.

A startup is as good as the creditworthiness of its foundational team. Unfortunately, Mr. Wright is learning that the hard way. Not to add that he has failed to prove that he is Satoshi, the man is leaving no stones unturned when it comes to bashing rivals. From an investors’ perspective, the entire situation is alarming.

What’s more? Mr. Wright is going against the court’s judgment of paying Dave’s share of bitcoin back to his brother Ira Kleiman. His clarification is that he does not have access to that bitcoin – the same stash which could prove he is the real Satoshi.

Instead, Mr. Wright claims the bitcoin is in a so-called Tulip Trust created by the departed Kleiman. The private keys of the Trust will likely reach him on January 1, 2020. And if that does not happen – which Mr. Wright has admitted, won’t – it could likely shake up the trust of existing BSV holders in the Bitcoin SV project.

Craig Wright says he can’t move his satoshi coins until a bonded courier arrives in a few days.

My guess: He’s going to say the courier’s airship went down over the Mariana Trench and he just needs some extra time to organize a recovery expedition https://t.co/Bq1vDmbs8Y

Jason Smith, the founder of Just Everything media group, wrote in a long Twitter thread about investors’ dipping interest in Mr. Wright and BSV.

“I feel bad for the people that have been tricked by Craig over the last year or so into believing [Mr. Wright] was going to be dumping a million BTC and BCH onto the market,” Mr. Smith wrote. “They honestly made their investment decision based on this lie.”

To all those people who told me to “just wait until 2020”, that I promised Craig would come up with a new excuse as to why he won’t be moving any coins… you’re welcome.

Overall, the toxicity alone makes Bitcoin SV a riskier investment to make in 2020. Watch out!

[Disclaimer: FXDailyReport.com does not endorse views presented in the op-ed above.]