After spiking at the start of the week, the price of bitcoin (BTC/USD) has failed to carry on with that rally. In fact, the pioneer cryptocurrency pulled back on Thursday to trade at $7,912 from its multi-month high of $8,308.

The BTC/USD broke out of a constrained descending channel early last month and has since maintained a bullish outlook that looks to take it towards new 10-month highs.

While the bears will look to pounce on the current pullback, the bulls maintain control amid increased market optimism towards cryptocurrencies.

From a fundamental perspective, analysts point out that the price of bitcoin could be driven by the capital flight from the Bitfinex exchange amid the Bitfinex-Tether scandal.

According to researchers from Blockchain Data providers TokenAnalyst, some of the reserves backing customer assets on the exchanges are likely insufficient since the Tether is insufficiently backed.

Analysts predict that this could prompt traders to pull their cryptocurrencies off exchanges thereby supporting the bullish momentum. Traders would rather exchange their unbacked assets for bitcoin. 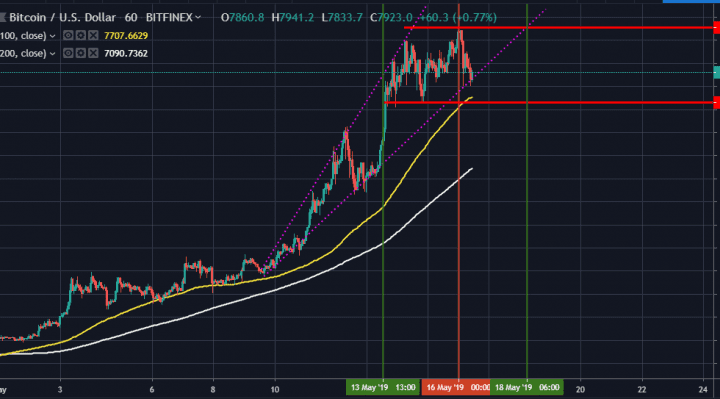 Technically, the price of Bitcoin appears to be going through a consolidative phase following what has been an extended bull-run. The pair has oscillated between $7,663 and $8,308 over the last three days with the only significant rally witnessed at the start of the week.

The new trading range creates opportunities for the bulls and the bears to target in the short-term. The bulls will target profits at $8,308 while the bears will look to pounce at $7,663. 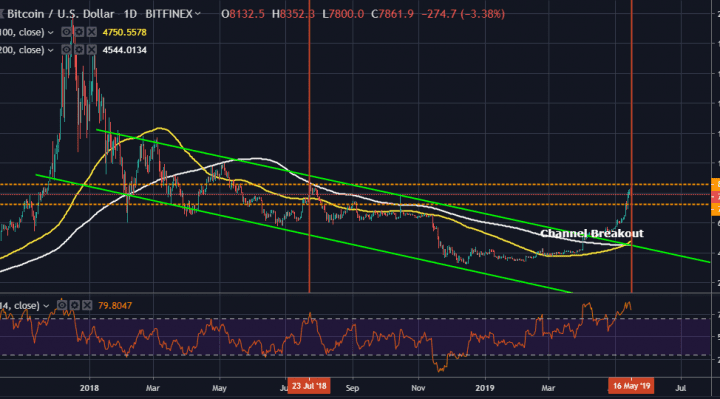 In the daily chart, the price of Bitcoin appears to be on a strong bullish trend despite the recent pullback. This puts the July 2018 highs of about $8,588 in focus with the bulls looking to maintain control.

However, given the recent rally, the bears will hope that a pullback is long overdue, which could make opportunities below more attractive in the short-term.

In summary, the price of bitcoin (BTC/USD) appears to be in a short-term consolidative phase. This could be a signal that a pullback is imminent. But also, the BTC/USD could be taking a breather ahead of the next bull-run.

The next few weeks will be interesting to watch as bitcoin attempts to reach new 10-month highs.