The GBP/USD currency pair continues its tepid recovery after last month’s plunge. The currency pair edged up to trade at 1.2176 on Monday morning but has since pulled back below 1.2150.

The pair is trading in a slightly ascending channel, which illustrates a modest short-term bullish bias. The current channel oscillation comes at the back of consolidative wedge that culminated with a short-term bearish breakout.

The GBP/USD is currently pegged just above the 100-hour and the 200-hour moving average lines, which supports the modest bullish bias.

From a fundamental perspective, the GBP/USD currency pair is trading at the back of two busy weeks and ahead of what could be a calmer week from an economic data standpoint.  The first week of August was all about the US-China trade war, which has continued to escalate and the Fed’s interest rate cut.

On the other hand, the UK’s no-Brexit deal is almost a certainty. However, with details of how the government is preparing for the hard Brexit leaked out, things are slowly turning out sour in the UK political arena.

This week, the details of the leak could dictate the movement of the pair. Already there are fears of potential food shortage as the EU economic block moves to implement new terms of engagement with the UK in the event of a no Brexit deal. 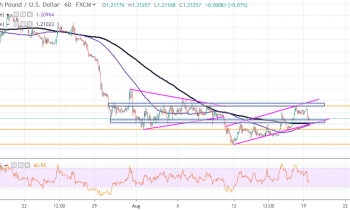 Technically, the GBP/USD currency pair hit overbought levels twice last week as it attempted to recoup losses incurred towards the end of last month. This week, the shift appears to be slightly bullish, but it is nowhere near the overbought levels of the RSI indicator.

This means that the current ascending channel could carry on through this week unless something major changes the market sentiment. Therefore, the bulls will target short-term profits at around 1.2176 while the will look to pounce at around 1.2078 or lower at 1.2018 in case of a major pullback. 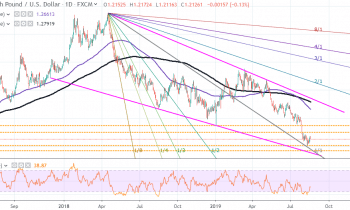 In the daily chart, the GBP/USD currency pair still appears to be experiencing intense bearish pressure as demonstrated using the Pitchfan from the current multi-year highs. The pair is currently pegged just above the median line, which is acting as support.

This suggests that the bulls could be looking at an inevitable rebound and they could set profit targets at 1.2247 and 1.2371. On the other hand, bears will target long-term profits at around 1.2014 and 1.1918.

In summary, the GBP/USD currency pair appears to be experiencing a short-term bullish bias but in the long-term, the bears are firmly in control. The bulls will be targeting all the rebounds they can get.