A wave of blockchain projects raised about $64.5 billion and lost about 87 percent of it, according to the Block.

The cryptocurrency news service evaluated the initial coin offerings – wherein startup sell digitized securities to retail investors to raise operational capital – and their returns since launch. It found that only 10.8 percent of those ICOs still have a positive return in terms of the US dollar. Most of the launched projects don’t even exist anymore, while the existing ones are looking at their profits getting declined. 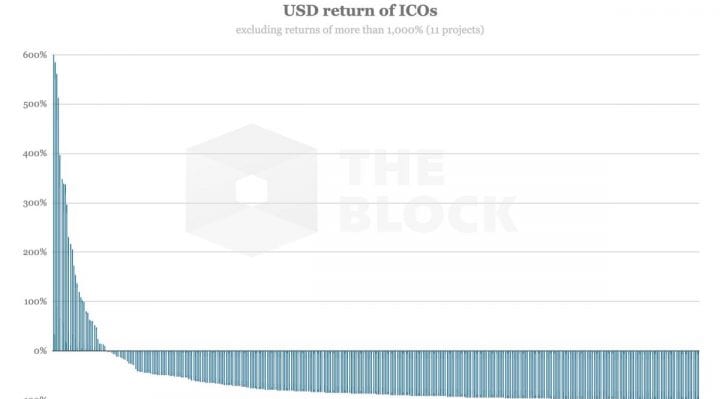 ICO Returns Calculated in US Dollar | Source: The Block

Larry Cermark, the director of research at the Block, said a majority of ICO projects had misaligned incentives between founders and investors. He stated that ICOs targeted mostly unsophisticated retail investors. Those projects made private digital assets out of thin air, appointed a make-believe value to it, and sold them to people alongside a business proposal that promised higher returns.

“The ICO statistics widely differ depending on the source,” Cermark added. “The highest estimate, from ICObench, says that there have been more than 5,600 ICOs that raised a total of $64.5 billion. The lowest figures say that at least $14 billion has been raised.”

7/ The average ICO in this data set raised $36.2 million while the median raise was $18 million. In total, they raised nearly $14 billion.

The Block noted that only 30 out of thousands of ICO projects managed to outperform bitcoin. That makes just 7.7 percent of the total projects. The rest, meanwhile, lost more than 90 percent of their value in terms of BTC. The media bitcoin return, the study added, was negated 91 percent. 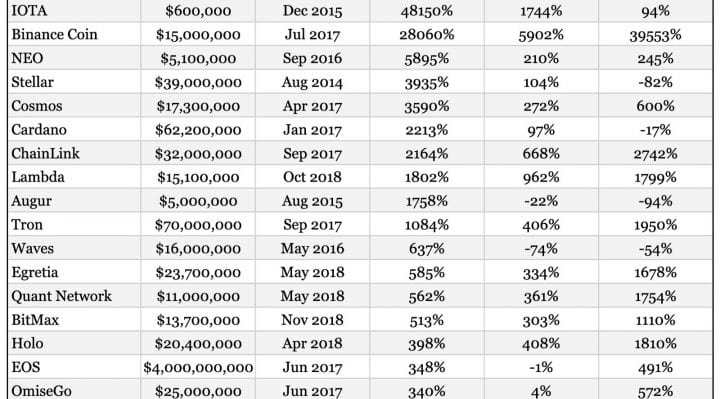 Cermark added that while ICOs have gone to dust, a similar trend is emerging in the form of initial exchange offerings. The analyst added that winners of the previous ICO trend are now beginning to become the new trendsetters, only to maintain or increase their winnings.

The comments indirectly targeted Binance, the world’s leading cryptocurrency exchange, whose native asset BNB returned more than 28,000 percent in profits. It is now hosting a string of new projects on its new blockchain, Binance Chain, with hopes of adding value to its BNB token. Excerpts from Cermark’s statement:

“Considering that a minimum of 89% of all ICOs has a negative USD return and that IEOs are starting to manifest the same trend, it’s safe to say that the vast majority of all ICOs can’t hold value over the long term. That being said, the winners still tend to win big.”

The bitcoin dominance rate, in the meantime, is growing higher.