Natural gas is still in consolidation mode just below the first retracement level on a longer-term chart. This suggests that sellers might be defending the area of interest quite well and could push for the selloff to resume soon.

RSI is heading lower, though, so there may be selling pressure in play. The oscillator has yet to cross the center line to signal stronger selling pressure. Stochastic is already below this and still on the move down while having enough room to head south before hitting the oversold region. In short, this signals that bears are very much in control and could push for a break below the consolidation.

If that happens, natural gas could revisit the swing low around 2.600 or lower. Price would need to break below the 200 SMA dynamic support as well to confirm that sellers are gaining traction. 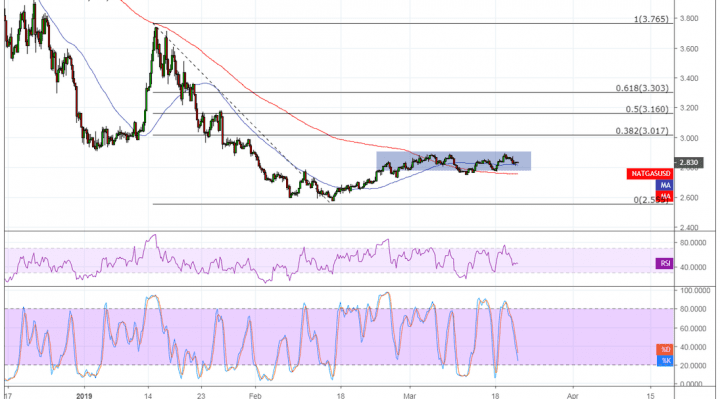 Natural gas seems to be pulled in opposite directions by market forces as production outages and forecasts of colder weather are propping prices up in the meantime. Still, there’s no stopping warmer weather from rolling in later in the month or in April, so there’s a chance that demand could tumble after a few weeks.

Risk appetite appears to be strongly present in financial markets as the Fed gave a more dovish than expected statement. This supports the narrative that rates could stay unchanged for much longer, which is good for businesses and commodity demand.