Two extremely different bitcoin technical indicators are fighting each other to enforce their bias on the market.

Prominent market analyst Jonny Moe noted that bitcoin’s current downtrend action is shaping up two textbook patterns: one bearish and another bullish. The bearish trend is valid once the price forms a descending triangle. At the same time, bitcoin developing a falling wedge pattern is bullish, as shown in the chart below. 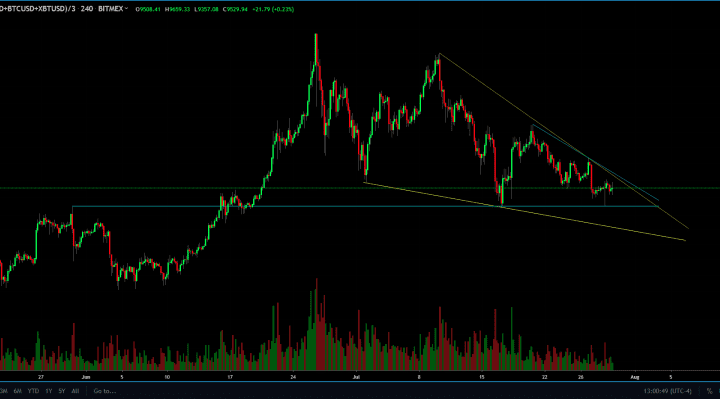 The yellow area is called a Falling Wedge, confirmed by two reaction highs and lows on the upper and lower trendline, respectively. Typically, it is a bullish pattern, which means the bitcoin price would continue moving downwards while staying inside the yellow zone. And upon reaching the apex, it would break above the upper trendline, rising as much as the height of the Wedge if accompanied by an increase in volume.

Similarly, the area defined by green is the Descending Triangle. Unlike the Falling Wedge, this pattern has a fixed lower trendline in the form of horizontal support. Meanwhile, a falling trendline to the upside is resistance.  It is a bearish pattern, which means the bitcoin price could keep bouncing between the green area before it breaks below the lower trendline on a high volume. Doing so, it would fall as much as the height of the triangle.

Good spot to be flat waiting for a break either direction.$BTC pic.twitter.com/10YpjYZmBS 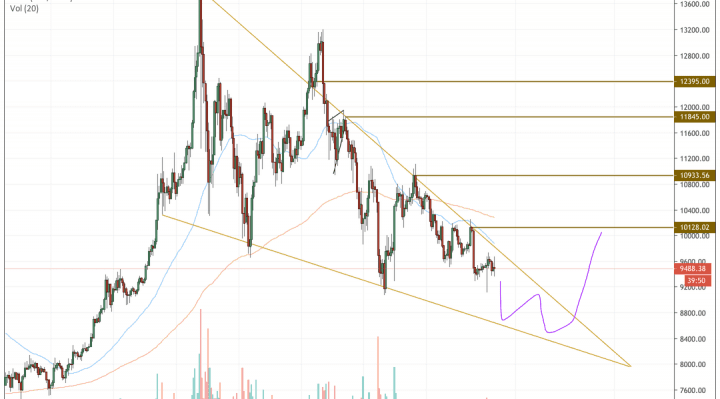 The bitcoin price is due to form lower highs as it trends downwards inside the yellow area. Each test of the upper trendline would give traders an ideal Long target upon a breakout scenario. For instance, if bitcoin breaks above the upper trendline today, the next resistance it would face is circa $10,933. If supported by volume, the price would keep breaking above the levels indicated in dark yellow. They are all posing as ideal upside targets as of now. 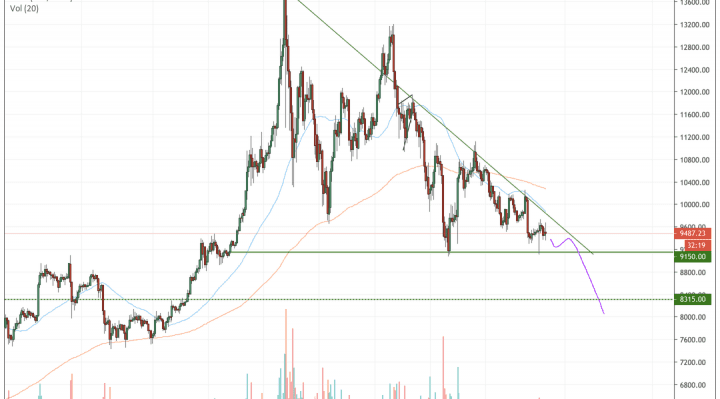 The bitcoin price is now a few steps away from retesting the lower trendline (horizontal support) of the Descending Triangle. From there, it could either bounce back and attempt one of its last retests of the upper trendline – or break below the support while keeping an eye towards the $8,300ish range as its next downside target.