The bitcoin price closed above the $10,000 ahead of the Hong Kong market open today. Twelve hours later, it went back below the so-called crucial support.

The consolidation action appears as a part of a broader price downtrend. On Saturday, bitcoin established a local high of $11,112.31 – a lower high – before continuing its corrective action for the rest of the weekend and this week. The cryptocurrency minutes ago dropped towards its intraday low of $9,921, indicating that it was in the mood of an extended downtrend. As of this press writing, it is falling. 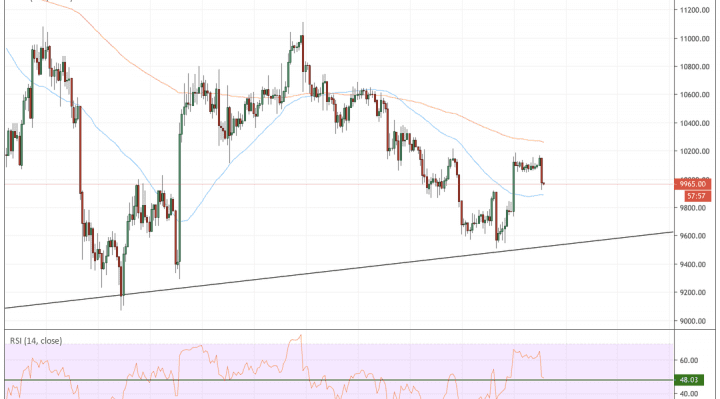 Josh Rager, a notable financial analyst, see a minor hope for bitcoin as the cryptocurrency spirals. The trader said Thursday that the $9,906 level could support bitcoin from falling further down. The same range on July 12 capped an intense downside action and sent bitcoin 12.40 percent higher – from $9,857.27 to $11,080.01. The historic behavior provides some relief for traders looking to enter interim Long positions. But for the rest, the market is offering no medium-term upside opportunities.

“Bitcoin zooming in on the hourly looks like price is retesting the resistance above at $10,146,” said Rager, adding:

Majority of prominent analysts are closely watching bitcoin to fill a gap left opened by the CME Bitcoin Futures.

That is – visibly – the correlation between bitcoin spot and futures. The CME charts left eight gaps in the last two months. The spot market filled five of them. The next one in line is at $8,500ish range, as shown in the CME chart below. 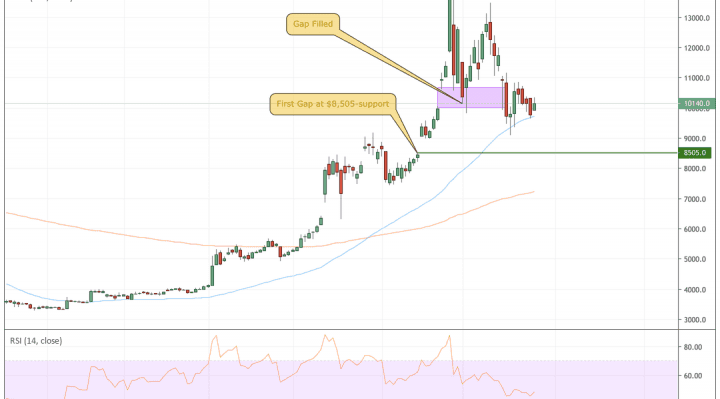 The spot price traditionally would fall towards the $8,500 level to fill the gap. The action downside wouldn’t precisely complete the downtrend, as there is another gap waiting at the $7,200 level below.

$BTC – (cme futures) new weekly candle opens within the range of the previous weeks candle so NO new gap. Only open gap on the #bitcoin “weekly” chart is at $8500 area… pic.twitter.com/2kxzT8tFFl

The testing of either of these levels could make a decent accumulation opportunity before bitcoin prepares itself for another rally. The cryptocurrency is already up by more than 200 percent since its bottom-formation near the $3,120-area last December. And there is less chance of it to revisit the area, especially amidst a growing awareness about it.