The price of Bitcoin (BTC/USD) struggled for firepower on Friday failing to extend the gains witnessed over the last two days. The pioneer crypto had fallen to trade at around $9,065 on Tuesday and Wednesday morning before conjuring a major pullback in the afternoon. Bitcoin added to those gains on Thursday rallying to top $10,760.

But on Friday, the picture appeared to be forming a sideways pattern with a slight bearish inclination. This short-term consolidative pattern has made things more interesting going into next week.

From a fundamental perspective, Bitcoin is trading at the back of a major news event that could tamper its current attempt to recover. News broke out on Friday that the CFTC is probing cryptocurrency exchange firm BitMEX for potential violation of regulations.

This could affect cryptocurrency trading, which in turn weighs on the prices of bitcoin and its counterparts.  Elsewhere, in China, Bitcoin Ransomware continues to plague the Asian country with unsuspecting cryptocurrency traders easily becoming victims of the scam.

And in the US, with Facebook’s Libra expected to face a critical legal battle, some are already drawing differences between Libra and cryptocurrencies like Bitcoin. The social media giant’s cryptocurrency project has been tipped to challenge Bitcoin as the best cryptocurrency in the market once it is launched. 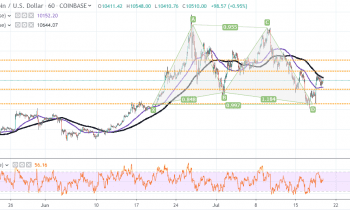 From a technical viewpoint, the price of Bitcoin appears to have recently completed the XABCD double-tp pattern, which triggered the current rebound. This creates some interesting trading opportunities for both the bulls and the bears. 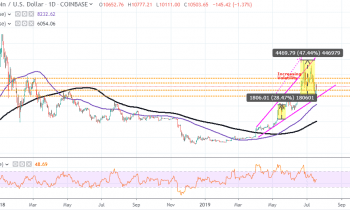 In the daily chart, the price of Bitcoin appears to have become more volatile over the last few months. This could create highly profitable opportunities for traders going into next week.

As demonstrated using the price change during two different periods, the price of bitcoin is now changing by as much as 47.44% within a few days as compared to earlier on (28.47%).

In summary, the price of BTC/USD (Bitcoin) appears to be very choppy currently, which is what traders like. The current consolidative pattern on the 60-minute chart could only be temporary before another huge swing happens.