The USD/CAD dropped aggressively in the last hour and erased the earlier gains. The USD received a hit from the United States economic data. The pair maintains a bearish perspective on the short-term and should reach fresh new lows in the upcoming days. The rate could turn to the upside on the short term only if the USDX will register an impressive rally in the upcoming days.

The dollar index has increased further and has reached an important resistance area and now is trading in the red again. A USDX’s drop will force the USD to lose significant ground versus all its rivals, so the USD/CAD should drop further if this scenario will happen.

The USD was ruined by the NFP, which it was reported at 103K in the previous month, much below the 188K estimate, it has dropped sharply compared to the 326K in the former reading period, while the Unemployment Rate remained steady at 4.1%, even if the traders have expected to see a drop to 4.0%. The Average Hourly Earnings increased by 0.3%, matching expectations, but I don’t believe that will be enough to stop the USD’s drop. 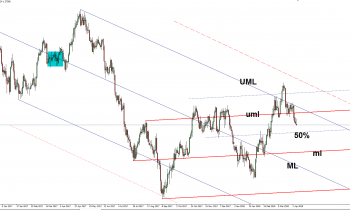 The rate dropped and reached fresh new lows as the USDX dropped and deleted the today’s gains. I’ve said in the last day’s article that the pair could drop towards fresh new lows, it could be attracted by the median line (ml) of the red ascending pitchfork if the USDX will drop further.

Support can be found at the 50% Fibonacci line (ascending dotted line), so only a valid breakdown will signal a further drop.