The USD/JPY Currency pair recovered from early morning declines on Friday to end the session on a higher at 108.563 after setting new weekly lows of 108.158. The pair continued to trade on a relatively sideways movement for the second week in a row.

The USD/JPY pair traded in a tight range of about (107.850-108.440) last week but this week, that range shifted upwards slightly to (108.220-108.780). This shows that while the bullish movement is not strong, the bulls are struggling to gain control as the bears continue to keep the pair in check.

From a fundamental perspective, the USD/JPY currency pair is trading at the back of what has been a positive week for the greenback relative to last week. This explains the small upward shift of the consolidative channel.

This week, the US reported that Retail sales grew by 0.5%, which was better than the 0.4% that analysts had predicted. Trade tensions also softened with plans to impose trade tariffs on Mexico reportedly postponed.

On the other hand, the US inflation edged higher in May, but only just. This sparked speculation that the Federal Reserve might consider cutting interest rates, which is not good for the greenback. As reported on Wednesday, the US price index rose to 255.155 points in May compared to 254.958 points in April. 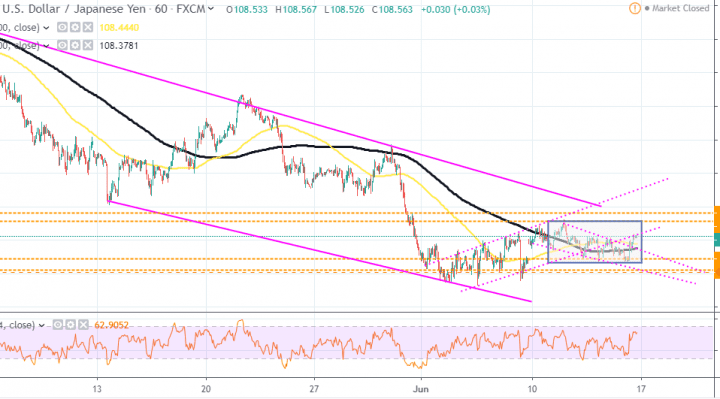 The USD/JPY currency pair appears to have made a reversal following the recent channel shift. Initially, the consolidative range appeared to slant slightly in a bullish movement as demonstrated in the 60-min chart, but now, the movement appears to be slightly bullish, albeit still range-bound. 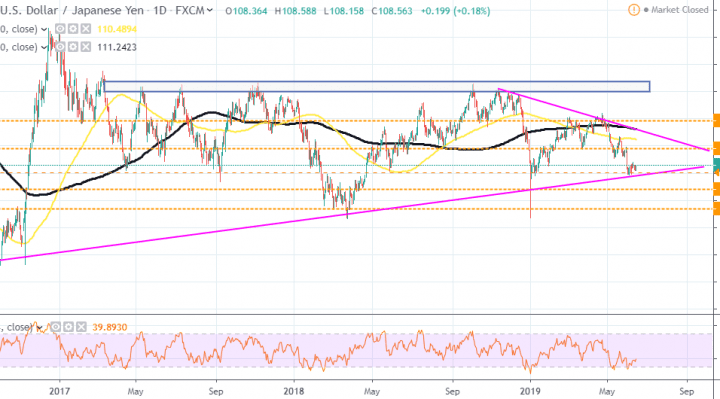 In the daily chart, the bulls still enjoy long-term control as demonstrated with the trending support. Up top, the pair appears to have recently begun to consolidate in a triangle formation from a previous flat top.

This suggests that a breakout could happen soon, with the greenback expected to recoup lost gains against the Yen. As such, the bulls will target long-term profits at 109.779 or higher at 111.845 while the bears will be hoping that the trendline support is breached by targeting profits at 106.536 and 105.387.

In summary, the USD/JPY currency pair appears to enjoy long-term bullish bias but a breakout could change that soon given the current consolidative pattern.