USDJPY has formed higher lows and slightly higher highs to create a rising wedge pattern on its 1-hour chart. Price looks ready for a test of support, and a bounce could take it back to the resistance around 112.00.

The 100 SMA is above the 200 SMA to signal that the path of least resistance is to the upside or that support is more likely to hold than to break. The 100 SMA is even holding as dynamic support for now before price even dips to the wedge bottom closer to 111.00.

However, a break below this level could set off a slide that’s at least the same height as the wedge pattern or around 200 pips. RSI is still heading south, so price could follow suit while bearish momentum is present. Similarly stochastic is heading lower to suggest that sellers have the upper hand.

Then again, both indicators are closing in on the oversold region to indicate exhaustion among sellers. Turning back up could indicate that bullish momentum is returning. 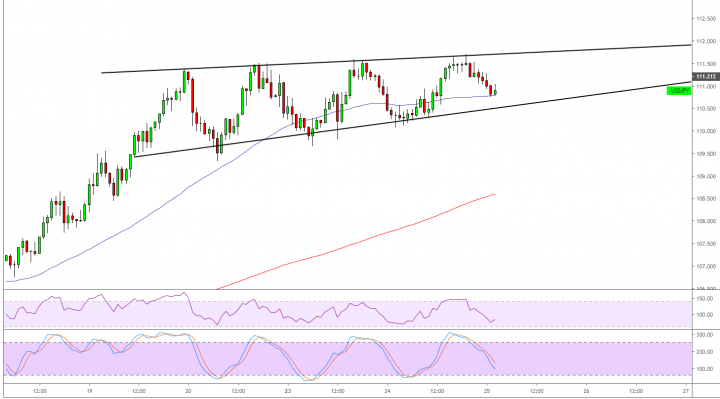 Traders appear to be waiting on the US Congress vote on the coronavirus aid package to determine where this pair might be headed next. Price is having a tough time breaking past the current resistance, suggesting that dollar bulls are exhausted and could use some unwinding soon.

Getting the stimulus package approved could usher in risk-taking, albeit temporarily, and weigh on the safe-haven dollar. Another scenario is that traders won’t be convinced that the aid package is enough to boost the US economy or limit the impact of the outbreak, which could still be bearish for the dollar.

The yen could prove to be the better safe-haven of choice in this case as there has been a slowdown in the number of cases in Japan and South Korea.