The WTI Crude Oil price plunged on Wednesday to trade below the key level $57.00 despite a positive EIA report, which beat expectations on oil stocks change for last week.

The pullback brought an end to a strong bullish run that had extended monthly gains to trade just under the $59.00 level after bottoming out at around the $53.00 level earlier last week.

The bull-run came during the formation of a bullish 3 drivers pattern after an extended period of volatile sideways trading dating back mid-August. The price of Light Crude oil is now making a recovery from oversold levels in the 60-min RSI indicator following the latest plunge.

From a fundamental perspective, the WTI Crude oil price plummeted on Wednesday on the news that US President Donald Trump offered to ease sanctions on Iran. If this is true then it would imply a potential increment in oil supply since the US sanctions on Iran have stifled the middle east nation’s supply lines.

Aside from the news, on Tuesday the US API Weekly Crude Oil stocks change report showed a change of -7.200 million barrels compared to the previous week’s change of +0.401 million.

And on Wednesday, the EIA reports confirmed this change, more or less, with Crude Oil stocks change of -6.912 million barrels for the week ending Sep. 6 as compared to -4.711M in the previous week. The figure also beat the expectations of -2.600M. 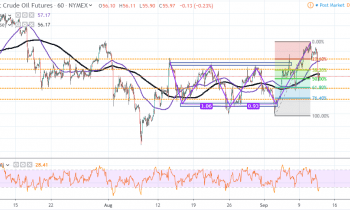 Technically, the WTI Crude Oil price appears to have run out of steam following a major rally over the last few days. Today’s pullback has pushed it to trade in the oversold zone of the relative strength index indicator and this could trigger the nex rebound as the shorts rush to cover their positions. 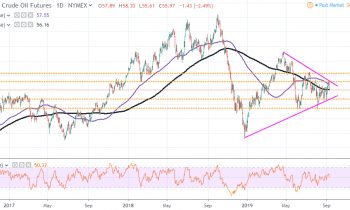 In summary, the price of WTI Crude oil appears to have recently run out of steam following this week’s rally but in the long-term, the battle between the bulls and the bears still rages on.