The price of WTI crude oil refreshed weekly lows on Thursday at around $54.79 before attempting a late recovery to close above $55.60. The light crude oil has been trading under extreme bearish pressure since last week after the conflict between the US and Iran appears to calm down.

The oil price dropped to the oversold levels of the RSI indicator in the 60-min chart but recovered after bottoming at just below $54.80.

From a  fundamental perspective, the price of oil is trading at the back of a relatively quiet period compared to the previous week. The light crude oil still appears to be suffering from last week’s events that saw the US-China strike a momentous trade deal. This happened off the back of what appeared to be a welcomed ceasefire between the US and Iran. Calm appears to have returned in the Persian Gulf and this puts pressure on oil prices.

On the other hand, the EIA natural gas storage beat the expectation of -91B with -92B up from the previous week’s -109B. Traders will be looking forward to the Baker Hughes oil rig count report on Friday. 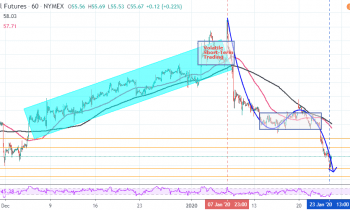 Technically, the light crude oil appears to be experiencing extreme bearish pressure after refreshing weekly lows below $54.80. The late recovery helped the oil price to climb from oversold levels thereby creating room for bears to target on Friday. 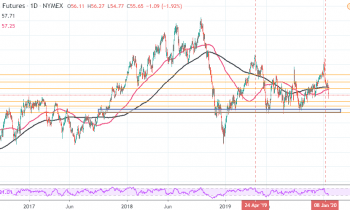 In the daily chart, the WTI Crude Oil appears to be trading under strong bearish pressure after the latest pullback. The oil price has been trading in a highly volatile cyclical pattern since June last year and this could continue for a few months.