Bitcoin price has been closing higher so far this week as it approaches a correction area visible on the 4-hour time frame. Note that price is still trading inside a descending channel pattern and has just broken past the mid-channel area of interest.

Speaking of moving averages, the 100 SMA is below the longer-term 200 SMA to signal that the path of least resistance is to the downside. This means that the downtrend is more likely to continue than to reverse. Still, a break past the Fibs and top of the channel could pave the way for a test of the 200 SMA dynamic resistance next.

Stochastic is on the move up but is already dipping into overbought territory. This suggests that bulls are already exhausted and could let sellers take over, particularly when the oscillator starts heading back down. 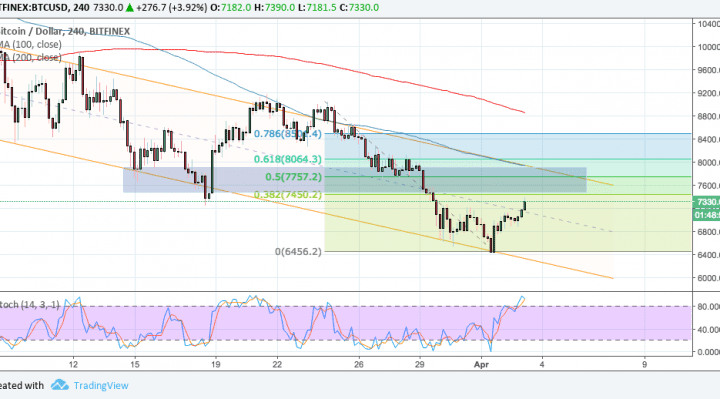 Bitcoin is doing well so far this month as a pickup in cryptocurrency volumes in exchanges like Bitfinex and Binance restored investors’ confidence that activity could be sustained even with the ban in cryptocurrency ads on Google and Twitter.

Apart from that, traders might be dumping their dollar holdings on renewed fears of a trade war between China and the US as the former already released a list of US imports to be subject to higher tariffs. The US government will release their own list of Chinese products to impose higher duties on this week, which suggests that tensions could still worsen.