Bitcoin continues to trade below a descending trend line but it’s worth pointing out that it formed slightly higher lows recently. This could be indicative of the formation of a double bottom chart pattern, which is seen as a classic reversal signal.

Price has yet to test the neckline around $7500 and break above it to confirm the potential uptrend. Before this, it needs to move past the nearby resistance levels. Among these is the 100 SMA dynamic inflection point at the $7000 major psychological mark. From there, it could test the 200 SMA next then the short-term descending trend line.

The 100 SMA is below the longer-term 200 SMA to signal that the path of least resistance is to the downside. In other words, the selloff is more likely to resume than to reverse. Stochastic is on the move up but approaching overbought levels to signal weakening bullish pressure and a potential continuation of the drop. 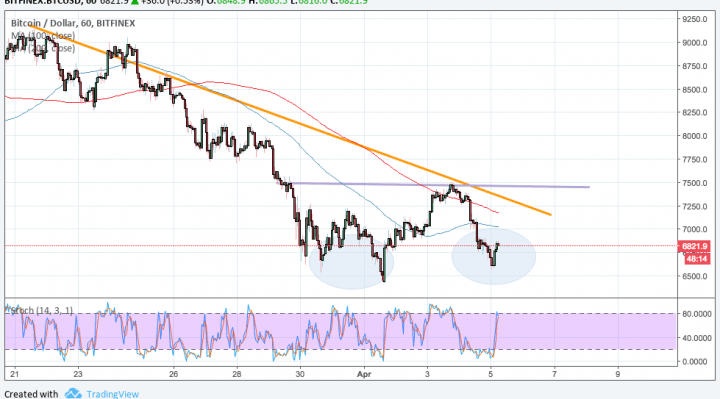 Bitcoin has been on weaker footing recently, likely owing to risk-off moves in the financial markets on uncertainty  surrounding the trade tensions between the U.S. and China. This has also driven up demand for the safe-haven US dollar, particularly as the NFP release is expected to heighten rate hike hopes.

Still, analysts predict that bitcoin price could be due for a strong recovery in the months ahead and that the recent “crash” is nothing to worry about. According to bitcoin expert and former COO of Skype:

“The price has been driven by speculators and they suddenly got cold feet but there’s considerable effort going on behind the scenes, including new underlying technology that is powering faster transactions. Meanwhile, regulators seem open-minded and are now working to eliminate the risks for consumers. So I see no reason why bitcoin shouldn’t fulfill its dream. And if it does then recent price falls will appear trivial.”