Bitcoin has broken past its short-term descending trend line to signal that a reversal from the downtrend is underway. Price is on its way to test the next potential ceiling at the 100 SMA dynamic inflection point.

Speaking of moving averages, the 100 SMA is still below the longer-term 200 SMA to signal that the path of least resistance is to the downside. In other words, the downtrend is more likely to resume than to reverse. However, the gap between the moving averages is slowly narrowing to signal weakening bearish pressure.

Stochastic is heading down from overbought territory to signal that sellers could still regain control. On the other hand, RSI seems to have some room to climb so bitcoin could keep heading north from here.

A small double bottom could also be seen as price failed in its recent attempts to break below $6500. The neckline of the chart pattern is located at $7500 and a move past this could lead to a rally of the same height as the formation. 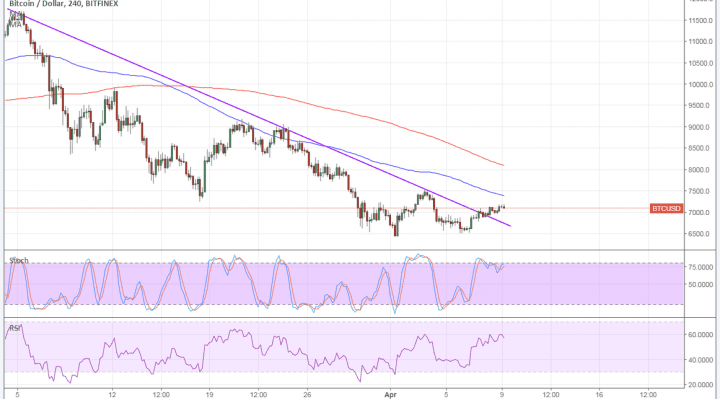 Bitcoin seems to be switching gears as headlines have focused on how big funds are investing in the cryptocurrency space. In particular, Soros Fund Management is making preparations to put funds in this industry, representing a change from Soros’ earlier stance that bitcoin is in a bubble.

Meanwhile, the dollar is under some weight as the latest NFP report printed weaker than expected results. This further dampened rate hike hopes, although traders could still take their cues from this week’s CPI release. Stronger than expected figures could revive talks of seeing four hikes this year instead of three as the FOMC indicated.

The FOMC minutes are also up for release and hawkish remarks could also lend more support for the dollar versus bitcoin. Then again, further tensions between the US and China when it comes to the tariffs could weigh on dollar demand and boost alternative assets like bitcoin instead.