Bitcoin recently made a quick pop higher but seems to have quickly lost bullish momentum as it hit the channel resistance on the 1-hour chart. Price could be gearing up to resume its slide from here and might go for the Fib extension levels next.

RSI is turning lower after recently hitting overbought levels. This signals that sellers are regaining the upper hand and could push bitcoin back to the support levels from here. Similarly stochastic is on the move down so bitcoin could follow suit.

The 100 SMA is also below the longer-term 200 SMA to confirm that the path of least resistance is to the downside. In other words, the downtrend is more likely to resume than to reverse. In the event of a larger pullback beyond the short-term channel, bitcoin could also find resistance at the 200 SMA dynamic inflection point. 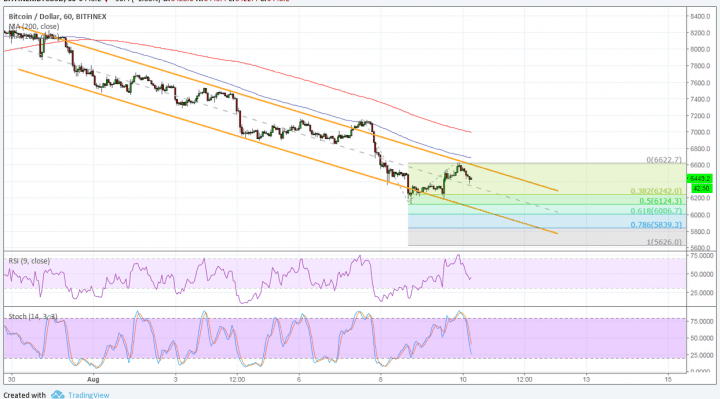 The recent rally in bitcoin is being dismissed as a mere pullback from the continuous slide since the start of the month as investors can’t seem to sustain the optimism from earlier on.

Although the quarter started off on a solid note with the spotlight on institutional interest, the positivity faded on a number of negative remarks from well-known economists and more recently on the SEC decision to delay its ruling on bitcoin ETF applications.

Traders might have to wait until the actual announcement in September, but doubts that these could be approved could further weigh on prices. Recall that the SEC already denied the application from the Winklevoss twins and a longer comment period could open the ETFs for more criticism.