Bitcoin appears ready to reverse from its downtrend as it forms an inverse head and shoulders pattern on its short-term chart. Price is already testing the neckline and a break higher could spur a rally of the same height as the formation, which is roughly $500.

However, the 100 SMA is still below the longer-term 200 SMA to indicate that the path of least resistance is to the downside. This basically means that the selloff is more likely to resume than to reverse. Then again, bitcoin is already closing above the 100 SMA dynamic inflection point as an early indication that buyers are ready to return. If it busts through the neckline, bitcoin could also encounter some resistance at the 200 SMA dynamic inflection point. 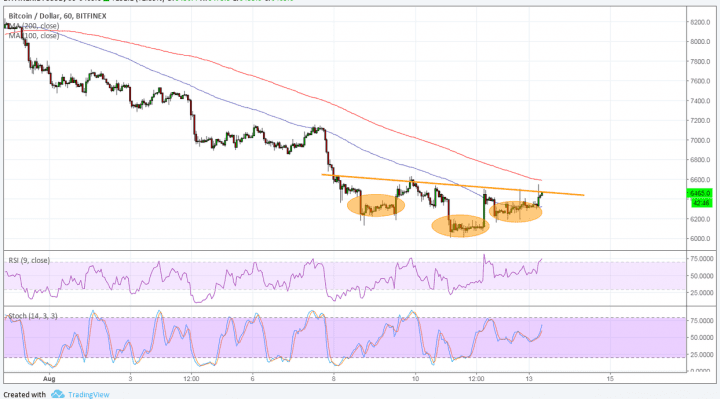 A few positive updates and some optimism to start the week may be propping bitcoin higher for now, but it would take a strong catalyst to sustain any rallies or reversals for that matter. So far, it has been reported that Intuit has been granted a patent that describes a method whereby Bitcoin payments can be processed by using text messages.

Apart from that, bitcoin could also be drawing some safe-haven demand as the Turkish lira has plummeted. Many are worried about contagion risks to emerging markets and a number of euro zone banks, thereby drawing them away from fiat currencies.