Bitcoin continues to trend lower on its 1-hour time frame as it tests the bottom of the descending channel. A pullback might be due before bears take this further south, though.

Applying the Fibonacci retracement tool on the latest swing high and low shows that the 61.8% level lines up with the channel resistance near the $8,000 major psychological mark. Price is nearing the 38.2% Fib at the mid-channel area of interest and also close to the 100 SMA dynamic inflection point.

The 100 SMA is below the longer-term 200 SMA to indicate that the path of least resistance is to the downside. This basically means that the selloff is more likely to resume than to reverse. The gap between the moving averages is also widening to reflect strengthening selling pressure. The 200 SMA lines up with the top of the channel also, adding to its strength as a ceiling.

RSI is still on the move up to show that buyers could stay in the game for a bit longer and allow the pullback to materialize. This oscillator is approaching overbought levels, though, so a return in bearish pressure could be imminent.

Stochastic is also in the overbought region to reflect exhaustion among buyers. Turning lower could allow bitcoin to follow suit and prompt another test of the channel bottom at $7,400. A break below this could spur a steeper slide. 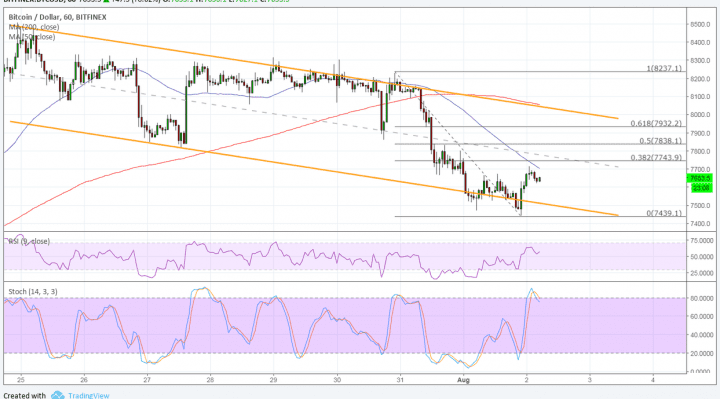 Bitcoin is currently being weighed down by a number of factors, starting from the outage on HitBTC that sparked hacking fears among investors and the news that South Korean officials are looking into removing tax breaks for exchanges.

To top it off, Nobel Prize-winning economist Krugman also lambasted cryptocurrencies, citing that he does not see the need for these to be introduced into the financial system. Meanwhile, the dollar has drawn demand from risk-off flows on resurfacing trade war tensions.