Bitcoin broke past the top of its short-term range at $6,600 to signal a pickup in bullish momentum. Price turned upon hitting resistance close to $6,900 to pull back and gather more buying pressure.

Using the Fib retracement tool on the latest swing low and high shows that the 50% level lines up with the broken resistance, which might now hold as support. If so, bitcoin could climb back to the swing high or beyond it. Price is currently testing the 38.2% Fib, which might be enough to keep losses in check, but a deeper pullback could still reach the 61.8% Fib at $6,500.

RSI is still pointing down after making its way out of the overbought region, signaling that sellers still have some control and could keep pushing bitcoin price down. Stochastic is also heading south without even hitting overbought levels, which suggests that bears are eager to return. 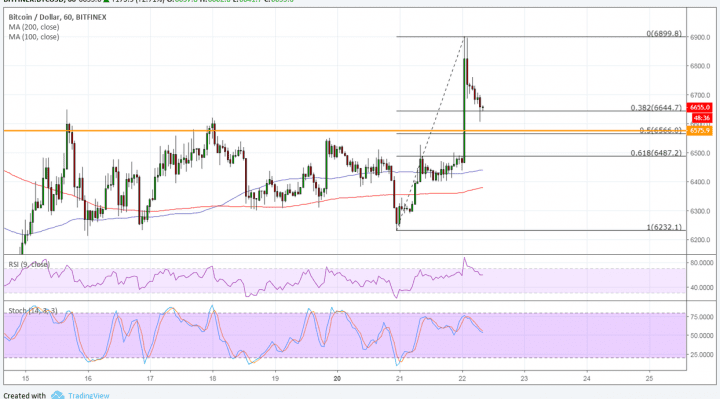 Many say that the burst higher was spurred by anticipation for the SEC ruling on the ProShares bitcoin ETF application due on August 23. Since this was filed in December last year, the regulator can no longer extend the deadline like it did for other applications last month. This could be indicative of how the SEC could decide on the next set of applications in September also.

Approval could mean a big boost for bitcoin and its peers as this would pave the way for more crypto securities being introduced. It could also mean more liquidity and increased activity for bitcoin, which could prove bullish for price. On the other hand, denial could lead traders to worry that the applications from SolidX could also be rejected.

Risk appetite has been observed in the financial markets and this appears to be propping bitcoin as well. Traders are also looking to the upcoming trade talks between the US and China to sustain this positive outlook, but the lack of any action could lead to a retreat soon enough.