Bitcoin is back to the area of interest visible on the 1-hour time frame and is still deciding whether to make a bounce or a break. If support holds, bitcoin could aim for the Fibonacci extension levels next.

The 100 SMA is above the longer-term 200 SMA to indicate that the path of least resistance is to the upside. In other words, there’s still a strong chance for the uptrend to resume from here, but the gap between the moving averages has narrowed. This signals that a bearish crossover might be in the works, possibly leading to another wave lower.

RSI is making its way out of the oversold region, though, suggesting that buyers are trying to regain control while sellers take a break. Stochastic is already on the move up so bitcoin could follow suit while bullish momentum returns. A break below the swing low around $6,270, on the other hand, could mean a reversal from the climb. 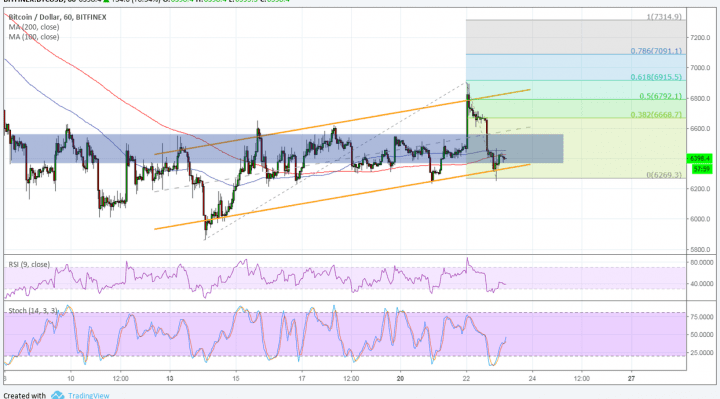 Bitcoin staged a strong rally in anticipation of the SEC decision on a number of bitcoin ETF applications this week but soon gave up ground when the regulator rejected these proposals. This may be a setback in terms of getting the thumbs-up from regulators in terms of crypto-based securities, but traders could still be hopeful that the next set of applications could see better results.

Recall that the SEC shelved its decision for a number of applications to the end of September to give more time for a comment period. Approval could revive strong gains for bitcoin, possibly spurring the much-anticipated rebound towards the end of the year. Rejection, on the other hand, could mean more losses.