Bitcoin is trading inside an ascending channel with its higher lows and higher highs. Price is currently testing the resistance and might be due for a move back to support soon.

RSI is already on the move down to confirm that sellers are regaining the upper hand. Stochastic is also moving south and has plenty of room to go before hitting oversold levels. Once the oscillators do, a return in bullish pressure may be imminent.

The 100 SMA is above the longer-term 200 SMA to signal that the path of least resistance is to the upside. This means that the uptrend is more likely to resume than to reverse. The 100 SMA also lines up with the 38.2% Fib just below the mid-channel area of interest where more buyers might be waiting to join in.

A larger pullback could last until the 50% Fib near the channel support and former short-term resistance at $6,700. The 200 SMA lines up with the lowest Fib at $6,600 and may be the line in the sand for a bullish correction. In other words, a break below this area could mean that the uptrend is over. 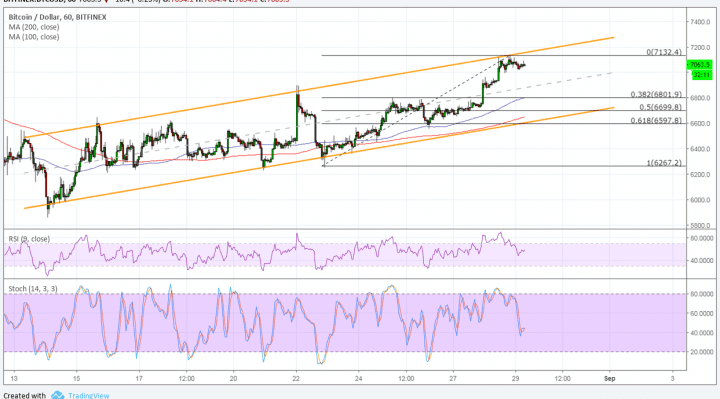 Bitcoin is drawing support from revived expectations that the rebound for the year is starting. Many still expect price to hit the record levels or even set new ones before 2018 comes to a close, although this could hinge on the SEC rulings on bitcoin ETF applications.

Recall that the regulator already rejected a number of proposals earlier this month but announced plans to review this decision. This comes ahead of another set of rulings due towards the end of September, and how they decide on the latest batch could be an indication of what might happen next.

Approval could bring stronger volumes and activity for bitcoin and also keep investors’ hopes up that more crypto-based securities could be introduced in the near future.