Bitcoin continues to trend lower as it crashed through support around the $6,700 level to hit a low of $6,140. Price could be in for a quick pullback from here, possibly testing the descending trend line connecting the highs on the 1-hour chart so far this month.

Applying the Fibonacci retracement tool on the latest swing high and low shows that the 61.8% level lines up with the trend line and 100 SMA. The 100 SMA is below the longer-term 200 SMA to confirm that the path of least resistance is to the downside. In other words, the downtrend is more likely to resume than to reverse.

RSI is still pulling up from the oversold region, though, so buyers have the upper hand and could keep pushing bitcoin price higher. Stochastic is also heading higher so bitcoin could follow suit, but this oscillator is approaching overbought territory to signal exhaustion among buyers soon. Once the oscillators turn lower, selling pressure might return and push bitcoin back to the lows or lower. 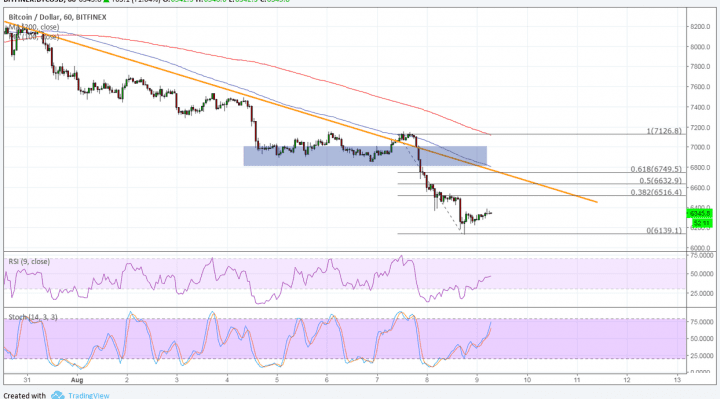 Many point to the SEC announcement on delaying their ruling on the bitcoin ETF applications as the main culprit for the latest drop. Then again, the slide has been going on for the most part of the week so there may also be a bit of FUD (fear, uncertainty, doubt) in play.

During these cases, traders tend to react more quickly and massively to negative updates and breaks of key technical levels. Accelerating selling momentum then draws more sellers in to close out their positions or take short bets, further driving price down as speculation pushes prices around.

In the absence of any positive updates, this could be the prevailing sentiment for bitcoin in the coming days. The SEC won’t be making a decision until the end of September to give time for comments on the proposed rule change, so uncertainty could stay in play until then.