Bitcoin broke to the upside of its falling wedge formation to signal that the selloff might be over and that a climb is underway. However, price hit a roadblock at the $3,700 area and might need a correction to gather more bullish momentum.

Applying the Fib tool on the latest swing low and high shows that the 61.8% level is closes to the broken wedge top. This is also around the $3,400 major psychological mark and the 100 SMA dynamic inflection point.

On the subject of moving averages, the 100 SMA is below the longer-term 200 SMA to confirm that the path of least resistance is to the downside. In other words, the drop is more likely to resume than to reverse. Still, it’s worth noting that price is trading above the short-term moving average as an early indication of bullish pressure.

RSI has reached overbought levels and is turning lower to indicate that sellers might be returning, also supporting the prospect of a pullback from the recent breakout. Stochastic is indicating overbought conditions and is pointing down to suggest that sellers might take over. A move below the Fibs could signal a continuation of the downtrend and a possible test of the wedge support. 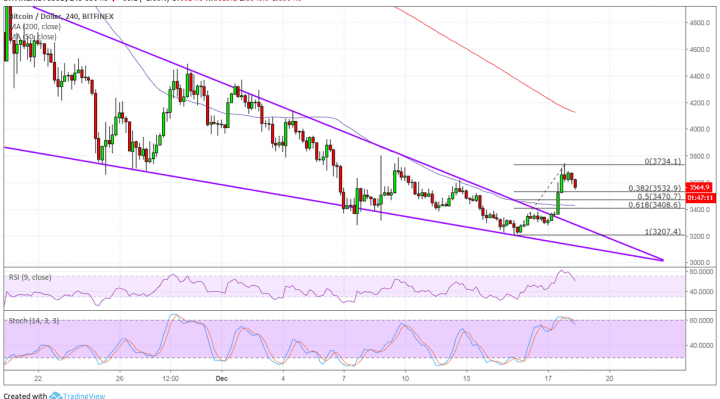 Sustained bullish momentum, on the other hand, could spur a climb to the 200 SMA next. Note that the wedge pattern spans $3,200 to $4,800 so the resulting rally could be of the same height.

A lot of factors are being seen as the catalyst for the upside break, one of which might be the launch of Coinbase’s crypto to crypto trading offering. This is widely expected to lead to a boost in volumes, even before institutional inflows kick in.

Another potential factor is profit-taking leading up to the FOMC statement as traders might also be squaring away dollar positions and stock holdings ahead of the central bank announcement.