Bitcoin looks prime for a pullback to gather more bullish momentum on its upside break. Applying the Fibonacci retracement tool shows the next potential support levels.

In particular, the 38.2% level lines up with the former resistance around the $3,700 mark. This also coincides with the 100 SMA dynamic inflection point, which adds to its strength as support.

A larger pullback could last until the 50% Fib that lines up with $3,600 or the 61.8% Fib just above the 200 SMA dynamic inflection point, which might be line in the sand for a correction.

RSI is still on the move down to signal that sellers have the upper hand and could push for a larger pullback. Stochastic has already reached the oversold level, though, and is turning higher to indicate that buyers are returning. 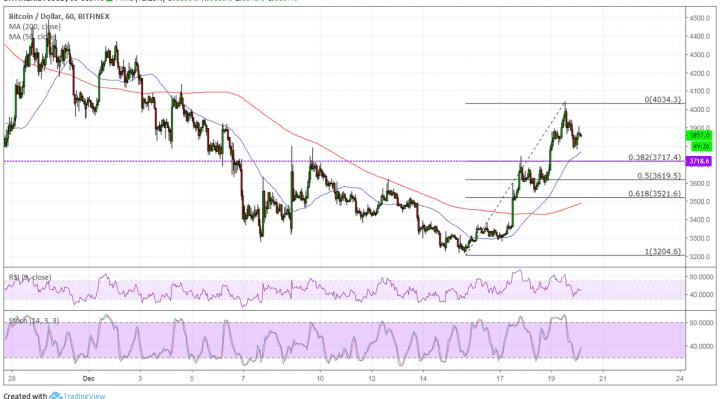 While the burst higher is being pinned on factors such as the Coinbase offering of crypto to crypto trading that could boost volumes or reports that Mark Dow’s large short bitcoin position has been closed. Still, the positive sentiment is being sustained by increased coverage on a possible strong rebound before the year closes or bullish forecasts for the following year.

Besides, the foreseen end of the bear market could revive expectations of stronger institutional volumes as 2019 opens. Keep in mind that the availability of institutional platforms for bitcoin then could bring in stronger volumes and keep prices afloat.

For now, though, the return in risk aversion in financial markets owing to the Fed’s hawkish bias is keeping a lid on bitcoin gains. Other higher-yielding assets like stocks and commodities also took hits as businesses and consumers anticipate higher borrowing costs on the prospect of more rate hikes next year. Dollar strength is also in play, dragging BTC/USD down from its latest highs, but the bounce is still in play.