Bitcoin has formed lower highs and higher lows to consolidate in a symmetrical triangle pattern. This suggests that sellers might be rethinking the slide but could also appear as a bearish continuation flag on longer-term time frames.

The 100 SMA is above the longer-term 200 SMA to suggest that the path of least resistance is to the upside. In other words, support is more likely to hold than to break. In that case, bitcoin could still recover to the triangle top around $4,300. Note, however, that price has fallen below the 200 SMA dynamic inflection point to signal that selling pressure is present.

A break below the bottom of the triangle could spur a drop that’s the same height as the chart formation, which spans $3,600 to around $4,600. This suggests that the downtrend might take bitcoin to the $3,000 level next. However, RSI is turning higher after dipping into the overbought zone, indicating that buyers are about to return. Stochastic is also hovering close to the oversold zone to reflect exhaustion among sellers and a possible return in buying pressure. 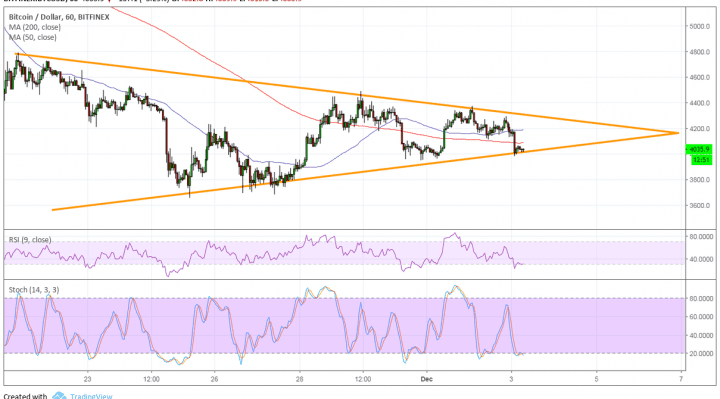 Bitcoin has made quite the pause from its bloodbath in the earlier weeks, indicating that buyers might still be defending major support zones. Then again, it’s also evident that bulls are being more careful in booking profits off quick rallies for fear of further declines down the road.

The renewed confidence in institutional inflows for early next year, buoyed by news that Nasdaq will push through with its futures launch, was enough to stem the selloff. Note that this factor is widely expected to bring in a strong price rebound in the first quarter of next year. However, bitcoin might still need a big catalyst and more than just optimism to sustain the climb and potential reversal.