Bitcoin is trending lower inside a descending channel and is currently testing support. This happens to line up with a key level that has held since the third week of November, so there may be significant bullish pressure right here.

Bitcoin looks prime for a test of its descending channel top around the $3,900 level and a break above this could signal that a move to the top of the range might be due. However, the 100 SMA is below the longer-term 200 SMA to signal that the path of least resistance is to the downside or that the selloff is more likely to resume than to reverse. This moving average is also currently holding as dynamic resistance.

RSI is on the move up to signal that buying pressure is in play and could stay until overbought conditions are seen. Stochastic is also heading higher to show that buyers are in control and could keep pushing for more gains. 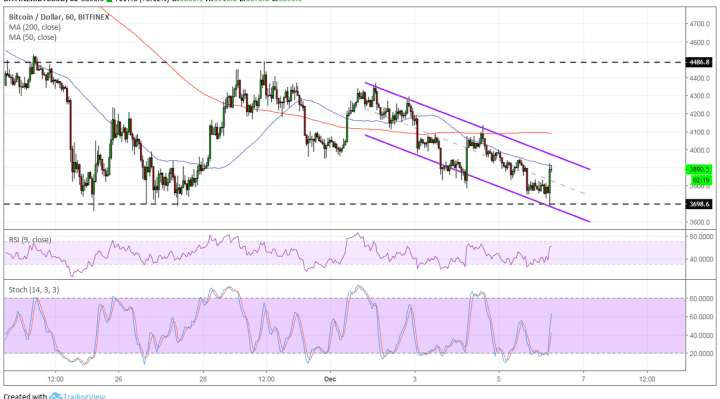 So far, though, it looks like bitcoin is still having a lot of trouble shaking off the bearish vibes from the earlier declines. A bit of a pause from the slide was seen on revived expectations of institutional investments but it looks like bulls need more to chew on.

Also, it doesn’t help that risk aversion appears to be returning to financial markets as geopolitical risks weigh. For one, trade tensions are still evident between the US and China even as both countries agreed to a 90-day truce on more tariffs. The lack of an agreement could still wind up hurting demand for riskier assets like cryptocurrencies later on.

Still, several analysts are maintaining bullish bitcoin forecasts, although some have pushed back rebound expectations for later into 2019 versus projections of a big rally in the first quarter of next year.