Bitcoin is starting recover from its drop over the past few weeks, consolidating inside a rising wedge formation. Price is currently testing the resistance and could be due for a move back to support soon.

The 100 SMA is below the longer-term 200 SMA to signal that the path of least resistance is to the downside. This means that the resistance is more likely to hold than to break. However, the gap between the two is narrowing to signal weakening bearish pressure.

An upward crossover could draw bulls back in and prop bitcoin higher, but stochastic is starting to turn down from the overbought region to reflect a pickup in selling pressure. RSI also looks ready to head south so bitcoin might follow suit.

Stronger selling momentum could even lead to a downside break from the wedge support around $15,000. Then again, this lines up with the rising wedge support to add to its strength as a floor. A breakout in either direction could lead to around $4,000 in gains or losses, which is the same height as the chart pattern. 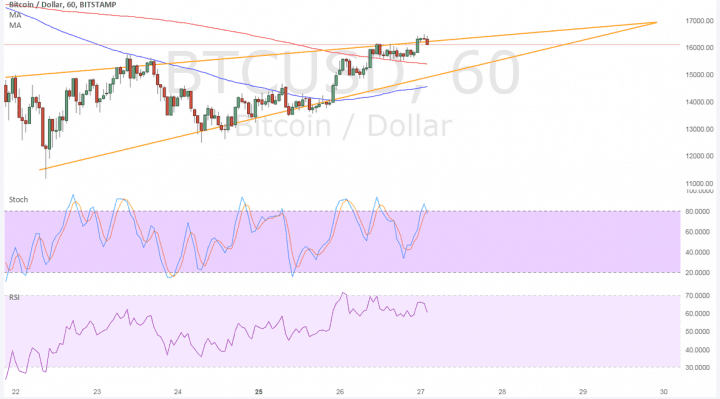 The US dollar is still enjoying a bit of support after Congress passed the tax bill and Trump signed it into law. This would mean stronger business activity in the coming months, which would buoy US markets and the dollar higher. It would also likely keep Fed tightening expectations in play.

As for bitcoin itself, there have been reports of a backlog in transactions on Coinbase owing to the unprecedented volume lately. So far, the issue still seems to be unresolved as more and more traders continue to flock to the bitcoin market.

There are still a few network upgrades scheduled in the coming weeks and if previous hard forks are any indication, it could propel bitcoin price to new highs yet again.